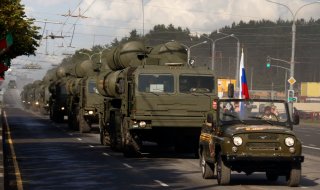 Even as reports suggest that a Russian invasion of Ukraine remains "imminent," Russian officials have claimed that its troops will return to their permanent bases. However, instead of providing any timetable, it now appears that Russia is taking a very direct and blunt stance: those forces will only return to their bases when Moscow is ready for them to do so.

And it isn't just Russia that is making the bold declaration.

On Monday, during a briefing with defense attaches, Major General Viktor Gulevich, Chief of the Belarusian General Staff, explained that Russia's forces will return back to their bases only when the need arises, according to a report from TASS.

"Russian troops will return to their permanent bases only when there is an objective need for that and we determine that ourselves. This is solely our internal matter," Gulevich stated. Gulevich emphasized that the timeframe for the return of the troops to Russia "will to a large extent depend on our Western colleagues."

Moscow has made several demands, including that Ukraine never be allowed to join NATO, and Russian president Vladimir Putin has also called for NATO to return to its 1997 status, which would require the expulsion of fifteen current members.

However, those requests have been described as nonstarters by the United States and NATO. As the two sides remain at an impasse, Russia has continued its buildup of military forces, and Putin recently announced that Moscow would recognize the independence of Ukraine’s breakaway regions.

Around 30,000 Russian troops had been deployed to Belarus to take part in the joint Union Resolve 2022 exercises. The drills were part of a combat readiness check of the Union State's response forces.

"The forces that have been deployed to Eastern Europe, including near the Belarusian state border, are one of the factors that influence any further developments," Gulevich stated.

This has been seen as a shift in language from Moscow, which just last week had maintained that its forces would return to Russia at the completion of the joint exercises. Russian foreign minister Sergey Lavrov even took aim at NATO for the alliance's deployments in Eastern Europe.

"Unlike the drills on its territory, which Russia performs, and after which the troops return to garrisons, the troops that are far from the territory of both the UK, the U.S., [and] Canada, are sent to Baltic states, to Black Sea states, those troops and arms usually never get back home," Lavrov said after talks with British foreign secretary Liz Truss on Thursday.

Now, it appears that Russia's forces could be staying in Belarus a while longer, at least if they are not sent to invade Ukraine.