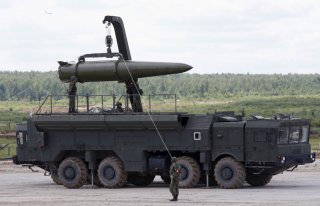 In video footage obtained by Reuters, Russian military convoys were seen carrying missiles north of Saint Petersburg to Vyborg, a medium-sized city adjacent to Russia’s border with Finland—a move that comes as Helsinki appears poised to enter NATO later in the year.

The video appears to show the trucks carrying Iskander short-range ballistic missiles, which can be equipped with nuclear warheads as well as conventional ones.

Although Russia has not confirmed its deployment of missiles near Finland, it warned in the run-up to Finland’s decision to apply for NATO membership that doing so would lead to reciprocal actions from the Kremlin, potentially including the re-deployment of missiles to Russia’s border with Finland and its exclave of Kaliningrad along the Baltic Sea coast.

“There can be no more talk of any nuclear-free status for the Baltic,” former Russian president Dmitry Medvedev, who now serves as the deputy chairman of Russia’s Security Council, said in April, implying that the decision of Finland and neighboring Sweden to enter NATO would be immediately met by the missiles’ redeployment. Finland and Sweden both formally applied to the alliance on Wednesday. Their application process is expected to be much shorter than it would under normal circumstances, although the future of their accession has been brought into question by Turkey, which has threatened to veto the process over the two nations’ alleged support for anti-Turkish Kurdish separatists.

Finland’s accession to NATO would pose a troubling security challenge to Moscow, as Finland shares an 830-mile border with Russia—far larger than its existing borders with Estonia, Latvia, Lithuania, Poland, and Norway—and Finnish territory is less than one hundred miles from Saint Petersburg, Russia’s second city.

Sweden and Finland each remained neutral during the Cold War between NATO and the Soviet Union, and until Russia’s invasion of Ukraine on February 24, polls in both countries consistently showed high support for a continuation of this stance. However, following the invasion—widely condemned across Europe as a war of aggression brought about by the personal ambitions of Russian leader Vladimir Putin—both countries joined the international sanctions campaign against Russia, and support for NATO membership skyrocketed among the Swedish and Finnish public.

As the two countries’ applications are considered, NATO Secretary General Jens Stoltenberg has suggested that the alliance might provide security guarantees to both countries, pre-empting any potential Russian actions intended at disrupting the accession process.