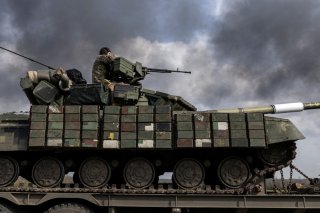 The Russian military has been repositioning and preparing for what now appears to be a massive assault on the Donbas area in eastern Ukraine, in an apparent attempt to recover from early failures with the invasion and seize the initiative in the east.

The offensive in eastern Ukraine is supported by Russian efforts to add at least eleven Battalion Tactical Groups (BTGs) to the region along with heavy armor, helicopters, and logistical support.

The official went on to say that there are indications that the Russians are appearing to be “learning lessons” from their failures in the north and are prepositioning their forces with sufficient logistical support and supplies for an extended incursion. In addition, the Russians appear to be reinforcing their forces in the area with twenty-two BTGs north of Ukraine with new supply stocks.

“[I]t appears as if they are trying to learn from the failed lessons of the north, where they didn't have proper sustainment capabilities in the area they were about to operate,” the official said.

However, a reinvigorated, heavily-armored, and well-supplied Russian force may still encounter unexpected problems in urban warfare should it seek to advance into the Donbas’ populated areas. Ukrainian forces armed with anti-armor weapons (such as Javelin anti-tank missiles) have already shown a unique ability to stage ambushes and hit-and-run attacks against advancing armored vehicles, weakening and destroying heavy mechanized forces with mobile, dispersed, and dismounted groups of defenders. In the air, Stinger missiles are known to be extremely effective against helicopters as well.

Ukrainian defenders could use their knowledge of the terrain and buildings to attack advancing armored platforms from hidden or obscured locations at key intersections, cross roads or “chokepoints” approaching Donbas. Ukrainian fighters have thus far demonstrated an ability to out perform potentially less motivated Russian troops finding themselves somewhat unexpectedly vulnerable to committed Ukrainian fighters.

At the same time, while Russia is clearly concentrating on eastern Ukraine, Russian forces are continuing to target Ukrainian cities throughout the country, including Western cities near the Polish border such as Lviv. Russia’s long-range strike capability seemingly remains in tact given its ability to attack urban areas from hundreds of miles away with rockets and cruise missiles. However, officials at the Pentagon have said there are indications that Russia is running low in its supply of precision-guided weapons. This is significant in that it could make it much more difficult for Russian attackers to pinpoint high-value targets, yet it regrettably does little to diminish Russia’s indiscriminate and very imprecise attacks on civilian areas which do not necessarily require precision weaponry.

The Russian push to the east may be part of a broader initiative to establish a Russian corridor along the Black Sea coastline up from Odessa through Mariupol to the Donbas area. Should Russia control a continuous supply route along this corridor, its forces could more easily be reinforced with supplies, weapons, ammunition, and manpower.