Pentagon Turns to Contractors to Ramp Up Military Aid for Ukraine 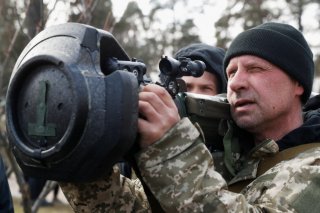 The Department of Defense is meeting today with chief executives from the eight largest U.S. defense contractors to discuss plans to supply Ukraine with weapons for as long as the war in Ukraine continues.

The Pentagon's Office of Acquisition and Sustainment will host a ninety-minute meeting, which Deputy Secretary of Defense Kathleen Hicks is expected to attend, according to Reuters. “We will discuss industry proposals to accelerate production of existing systems and develop new, modernized capabilities critical to the Department’s ongoing security assistance to Ukraine and long-term readiness of U.S. and ally/partner forces,” a defense official told Defense News.

Almost daily shipments of Javelin anti-tank and Stinger anti-aircraft missiles to Ukraine have significantly depleted the U.S. military’s reserves, prompting the Pentagon to explore ways to boost the production of these systems in a cost-efficient manner. The challenge of maintaining adequate domestic stocks of key systems amid unprecedented weapons transfers to Ukraine is expected to be one of the central questions on the meeting’s agenda. Raytheon is the prime contractor for Stingers, while Javelins are jointly produced by Raytheon and Lockheed Martin.

CNN reported on Wednesday that the United States is expected to soon announce a new tranche of security assistance, worth hundreds of millions of dollars, to Ukraine. Despite this, Washington has been slow to provide Kiev with the MiG-29 fighter jets and long-range missile systems it is asking for. The Pentagon previously shot down a Polish proposal to supply Ukraine with MiG-29 fighters, with Pentagon press secretary John Kirby describing it as “untenable” in early March. “It is simply not clear to us that there is a substantive rationale for it,” he said. The Biden administration has taken steps to coordinate the delivery of a Slovakian S-300 surface-to-air missile (SAM) system to Ukraine, but one additional S-300 battery is unlikely to meaningfully bolster Ukraine’s long-range missile defenses at this stage in the war. The delivery of American Patriot batteries to Ukraine is all but off the table; defense officials say these complex systems would have to be operated directly by U.S. troops, which is a clear breach of President Biden’s pledge not to put U.S. boots on the ground in Ukraine.

The Defense Department has previously said that smaller, portable systems— particularly Javelin and Stinger missiles—are most effective in meeting Ukraine’s defense needs. But as the conflict shifts further eastward, NATO is reportedly exploring ways to adjust its military aid to better suit the open, mechanized warfare that awaits Ukraine in the Donbass region.