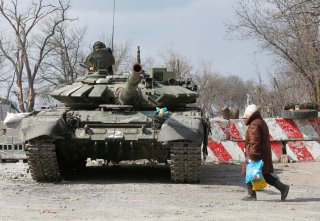 The World Bank has provided an early estimate of Russia and Ukraine’s financial losses since the Kremlin’s invasion of its western neighbor on February 24. The international financial institution estimates that Ukraine’s GDP will shrink by 45.1 percent throughout 2022 and that Russia’s will shrink by 11.2 percent—largely as a result of the stringent international sanctions imposed against Moscow.

In addition to the impact on Russia and Ukraine, the World Bank concluded in its spring forecast that European and Central Asian economies would decline by an average of 4.1 percent in 2022. World Bank officials cited the economic consequences of the conflict in Ukraine and the ongoing negative effects of the COVID-19 pandemic as causes.

“This is the second major shock to hit the regional economy in two years and comes at a very precarious time for the region, as many economies were still struggling to recover from the pandemic,” World Bank Vice President for Europe and Central Asia Anna Bjerde said during a conference call, according to Bloomberg.

The spring forecast, which was released on Sunday, projected that the economies of Belarus and Moldova in Europe and Kyrgyzstan and Tajikistan in Central Asia would shrink, while most neighboring countries would grow at an “anemic” rate. The organization also acknowledged that its early estimate was uncertain, as further events later in the year could speed up economic recovery or further impede it.

Although the direct damage from the Russo-Ukrainian War has largely been confined to Ukraine, the war has thrown financial markets into chaos and sharply driven up commodity prices. The war has had a particularly significant impact on wheat prices, as Russia and Ukraine are two of the world’s largest wheat exporters. Wheat shortages and price increases have already been linked to unrest in other nations, notably in Iraq, an importer of Ukrainian wheat.

Although most of Russia has not been directly impacted by the conflict—except for border regions such as Belgorod, where Ukrainian helicopters struck a fuel depot on April 1—international sanctions have largely isolated Russia’s economy from Western markets. Both Russia’s central bank and its other major banks have been banned from the SWIFT international bank transfer system, and billions of dollars in Russian assets have been frozen in the West. The U.S. Treasury Department also banned American banks from helping Russia pay its debt obligations in the United States, meaning it is almost certain to default in early May, which would have further negative economic consequences.