Protests Break Out in Iraq Over Shortage of Ukrainian Grain 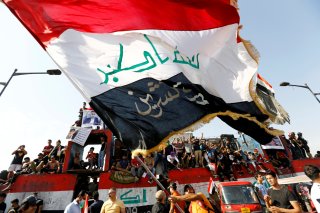 A series of protests have roiled southern Iraq after a shortage of food imports from Ukraine led to significant price increases. Ukrainian wheat and sunflower oil, once ubiquitous imports to Iraq, have dried up after the Russian invasion of Ukraine abruptly severed Kyiv’s export supply chains.

While Iraqi politicians have promised to address the crisis and discussed the implementation of price controls on essential goods, the country has taken relatively mild measures so far. The Iraqi government announced on Tuesday that it would provide an additional monthly allowance of around $70 for low-income civil servants and retirees. It also indicated that it would waive customs tariffs on food, construction materials, and other basic consumer goods for a period of two months.

The government also announced that it had cracked down on price gougers, with the country’s interior ministry issuing a statement claiming that thirty-one merchants had been arrested for “abusing citizens” by unreasonably raising their food prices. However, these responses have not led to price decreases and have so far failed to quell public unrest. Hundreds of Iraqi protesters gathered in the city of Nasiriya on Wednesday to protest grain prices, and at least one protester was injured in the country’s central Babil governorate after demonstrations turned violent.

The ongoing protest wave is an issue of concern to the government of Prime Minister Mustafa al-Kadhimi, who came to power after a similar wave of protests expelled Iraq’s previous leader, Adil Abdul-Mahdi, in mid-2020.

Russia and Ukraine are two of the world’s five largest wheat exporters. Together, the two nations produce 20 percent of the world’s wheat, and much of their annual export crop goes to the Middle East.

While Russian imports would not ordinarily be affected by the war, which has devastated Ukrainian agriculture but has left Russia’s fields largely intact, the expulsion of the Russian central bank from the SWIFT financial transaction authentication system has complicated its ability to engage in commerce with the rest of the world.

Many Middle Eastern nations have enacted subsidies on bread and other basic commodities, and high grain prices have further stretched their budgets.