Ukraine Invasion Will Raise Prices For These Three Goods 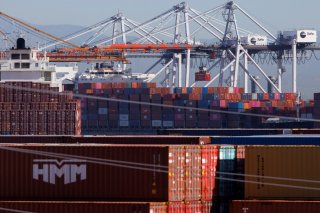 Now, with Russian president Vladimir Putin’s decision to invade Ukraine, that number is expected to shoot up even higher in the coming months. And already, there’s talk that inflation could reach and perhaps eclipse 10 percent, which would surely bring about even more pain to the pocketbooks of millions of Americans.

“Inflation is likely to peak at higher levels that we were envisaging just a few days ago,” Ben May, director of global macroeconomic research at Oxford Economics, told CNN.

Given this concerning backdrop, what goods could become much more expensive for most Americans? Here are three to think about.

According to AAA, the average price of a gallon of regular unleaded now comes in at $3.53, which is twenty-two cents higher than last month. With global oil prices jumping above $105 per barrel on Thursday—the highest level since 2014—experts say $4 or even $5 gas is a real possibility in the coming weeks and months.

“The concern is that Russia would somehow curb oil exports if they really feel backed into a corner,” Patrick De Haan, head of petroleum analysis at GasBuddy, told Vox.

He added that Russia made the decision to postpone natural gas shipments last fall when Germany delayed the approval of the Nord Stream 2 pipeline from Russia to Europe.

“Who knows? Maybe Russia will do that again with oil,” De Haan said. “That’s certainly a nightmare situation, but it could happen.”

CNN also reported that global food prices were already near a decade high before the Russia-Ukraine conflict—but the invasion “could make matters worse.”

“Russia is the world’s top exporter of wheat, while Ukraine is a significant exporter of both wheat and corn,” the news outlet reported. “They also export vegetable oils.”

In light of the conflict, prices for wheat have surged to their highest level since 2012. Corn and soybeans saw a big bump as well.

“Regardless of exactly where foodstuffs go, clearly if there’s a shortage generally in the world, then the price is going to be driven up,” May claimed.

Due to rising fears of a supply disruption after Russia invaded Ukraine, prices for certain metals, including aluminum and nickel, have been climbing to record highs.

Per CNBC, Russia is known to supply 35 percent of the world’s palladium and 10 percent of global platinum supplies.

“Aluminum and nickel are making further gains amid fears that these two base metals could suffer supply outages from Russia as sanctions are imposed and counteraction is taken,” Commerzbank stated in a note to clients.