Will Russia Weaponize Its Wheat As the World Combats the Coronavirus? 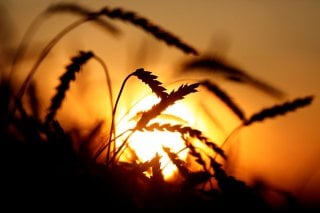 As the world remains in the throes of the pandemic, our next global crisis is looming. Just a few weeks ago, Siberia experienced 100° Fahrenheit weather for the first time in recorded history. The rapid warming caused permafrost to melt, damaging building infrastructure and even contributing to an oil spill. Despite the apocalyptic weather in Siberia, the Russian state largely views climate change as a boon. The government has announced that it plans to use the benefits of climate change, particularly in the agricultural sector. These so-called benefits are one-sided, as they will give Russia another potential weapon in its hybrid warfare arsenal: wheat.

Russia is one of the very few countries that are likely to see an increase in arable land—in previously frozen places like Siberia—under most climate change scenarios. Scientific projections show that warming may expand Russia’s wheat-suitable land by 4.3 million km² in its boreal regions. Though wheat only makes up for 2.3 percent of Russia’s total exports, that constitutes a major proportion of the global wheat export market. Russia is the world’s largest wheat exporter and is expected to control 20 percent of grain export markets by 2028. Climate change is likely to make Russia an even greater global grain power.

Russian control of such a large portion of the global grain market is not a recipe for food supply stability. While climate change may expand Russia’s arable land, it is not immune to extreme weather. Melting permafrost has made the country more susceptible to wildfires, and drought will likely become more frequent and severe. Climate change will impact food security domestically, but because of Russia’s increasing role as a global grain power, the international impacts will be more acute. With climate change, other countries may rely more on imports from Russia, which will make them all the more vulnerable when Russia experiences its own climate impacts and restricts exports. Playing Russian Roulette—pun intended—with grain supplies will be increasingly perilous for other countries as the climate warms.

The coronavirus has revealed how risky it can be to rely on Russia for grain imports. Despite warnings from the WHO and WTO, Russia imposed an export quota on critical grains such as wheat, barley, and maize as the virus swept across the globe. Russia’s move caused other countries to scramble to shore up their grain reserves, adding another burden on governments already stressed by the pandemic. The quota had the greatest impact on Russia’s top importers: Turkey, Egypt, and Bangladesh, all three of which are strategically important and fragile states in their regions. Fortunately, the quota expired this month and has not been renewed.

This is not the first time that Russia has restricted food exports, and the results of these restrictions can be destabilizing. In 2010, Russia restricted its grain exports in the face of drought. This triggered high food prices worldwide, which scholars have linked to the onset of the Arab Spring uprisings. It is understandable and appropriate that domestic food security is the Russian government’s priority. However, even when domestic food security is not threatened, the Kremlin has responded to crises by limiting exports. Russia still had significant grain reserves when it imposed an export quota in 2010, and the same is true today.

Even more worrisome than Russia limiting exports in times of crisis is the possibility that Russia could limit exports for political leverage. Russia could weaponize its wheat exports to coerce other countries whose climate-induced food insecurities leave them few options. Russia has proved itself adept at hybrid warfare and has used its other resources—like fossil fuels—as weapons. Given Russia’s creative use of resource power, its role in global wheat markets is concerning. Whether for domestic food security or international hybrid warfare, Russia’s behavior in 2010 and now during the coronavirus foreshadows new dangers in a warming world.

Aggressively addressing the threat of climate change has become even more paramount as this threat from Russia looms, and policymakers face a crossroads. The first option is a post-coronavirus return to normalcy without reducing greenhouse gas emissions. Still, even that “normal” will be increasingly punctuated by climate impacts, whether they are desertification, hurricanes, extreme drought, or even another pandemic triggered by melting permafrost. All of these disasters would have cascading effects on food security. In an increasingly unstable world, Russia is likely to have more situations in which they feel threatened and curb grain exports.

The second approach to climate change is to focus on the vulnerabilities the pandemic has uncovered. Instead of emerging from the pandemic with a “business as usual” approach, governments can stimulate the economy by speeding the transition to cleaner energy. Policymakers can be proactive about food security. Countries can examine their food imports to consider the climate adaptability and geopolitical aims of the exporting country, modifying their import portfolios accordingly. The pandemic has helped expose the problem of food waste; by innovating new ways to redirect food, countries can reduce their reliance on imports.

Now is the time for governments to increase participation in international institutions. More international coordination will help us address the pandemic, just as it will help us face the climate crisis and resulting in food insecurity. Already, countries in Latin America and the Caribbean have coordinated to support supply chains during the coronavirus. This model can be expanded further by tasking an international organization to host backup grain reserves. If an international organization manages a grain stockpile, then it can release supplies to countries in need the next time Russia limits exports—for pandemic, climate, or geopolitical reasons.

In every crisis, there is opportunity. The question now is who will seize that opportunity: Russia or allied nations? The global devastation wrought by the coronavirus is a precursor to the climate crisis. The next ten years are the last chance we have to reach the (modest) Paris Agreement goals. Global leaders should turn this public health and economic crisis into an opportunity to seriously address the climate crisis. Mitigation is required, but so is adaptation and the responsibility to prepare for the warming we are already experiencing. Adaptation and resilience require an innovative and proactive approach to food security. Russia has revealed that it will not be a reliable source of grain the next time it suffers a pandemic or extreme weather. We ignore this lesson at our peril.

Sherri Goodman is a Board Member at the Atlantic Council and a Senior Fellow at the Environmental Change & Security Program and Polar Institute at the Wilson Center. She is the former Deputy Undersecretary of Defense (Environmental Security).

Clara Summers is a Master’s candidate in International Peace and Conflict Resolution from American University’s School of International Service. She is a former Research Assistant Intern at the Wilson Center.