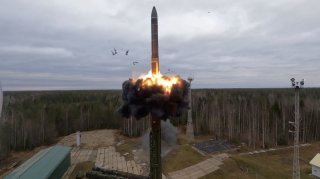 Russian leader Vladimir Putin oversaw military exercises on Wednesday simulating a massive launch of nuclear missiles. The exercise was framed as a practice retaliatory strike in the event of a nuclear war, amid heightened tensions between Russia and NATO against the backdrop of the conflict in Ukraine.

The exercises were intended to simulate a “massive nuclear strike” against an unspecified enemy—heavily implied to be the United States or NATO—according to Russian defense minister Sergei Shoigu. During the drill, a RS-24 Yars intercontinental ballistic missile (ICBM) was fired from the country’s northern Plesetsk launch site, and an R-29RMU Sineva ICBM from a nuclear submarine in the Barents Sea, while strategic bombers also launched cruise missiles. The Kremlin characterized the drill as successful, claiming that all the missiles fired had hit their targets.

Russia and NATO have each conducted regular nuclear drills in recent years. Earlier in October, several NATO nations participated in the Steadfast Noon exercise intended to replicate a nuclear conflict against an unspecified eastern foe, generally understood to represent Russia. The Biden administration claimed on Tuesday that it had been notified of the exercise well in advance, in accordance with a previous arms control agreement signed before the Russian invasion of Ukraine in February.

In recent weeks, Putin and other Russian leaders have warned that they would use “all means available” to defend Russian territory—a designation that they claim extends to the Ukrainian regions of Donetsk, Luhansk, Kherson, and Zaporizhzhia, all of which was “annexed” by dubious referendums last month. No nation has yet recognized Russian sovereignty over the four regions, and dozens—mostly in the West—have explicitly rejected it. Following the referendum, Ukraine’s armed forces have continued their counteroffensive to recapture the four “annexed” areas, so far without a dramatic escalation from the Russian side.

Russia has also warned that Ukraine intends to detonate a “dirty bomb”—a conventional explosive laced with radioactive materials, spreading toxic radiation across a wide area without the extreme destruction of a nuclear blast—within Ukraine as part of a false flag attack intended to implicate Russia in war crimes. Putin insisted on Wednesday that Russian intelligence had learned of the Ukrainian plans in detail, although Kyiv and several Western nations have explicitly rejected the existence of such a plan.