Is Russia Turning the Tide in the Battle for the Donbas? 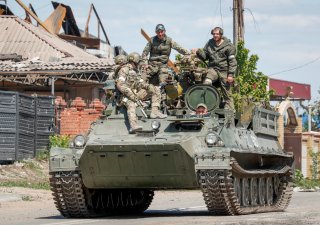 In what may be one of the decisive moments in the battle for the Donbas, Russian forces are pressing their attack against one of the last remaining Ukrainian outposts in the Luhansk region.

Chechen leader Ramzan Kadyrov wrote on Telegram that Russian forces have broken through to Lysychansk, a city sitting just across the river from the major Ukrainian stronghold of Severodonetsk. There are reports that fighting has also reached the outskirts of Severodonetsk, the last major Ukrainian city in Luhansk under Kyiv’s control.

Russian forces are advancing on the Severodonetsk-Lysychansk salient from three directions in an attempt to encircle a large pocket of Ukrainian troops. Military experts have warned that the Ukrainian forces there are at significant risk of being wholly enveloped by the Russian assault, potentially setting the stage for a cauldron battle that could seriously degrade Ukraine’s continued ability to contest the Donbas region. A local pro-government military administration head, Serhiy Haidai, said earlier on Wednesday that the primary route between Severodonetsk and nearby Ukrainian-held Bakhmut has not yet been cut off even as the city faces near-constant airstrikes and shelling.

Russian forces likewise appear to be making progress in other parts of eastern and southern Ukraine. Local pro-Russian official Vladimir Rogov told Russian state media that Russian forces have “liberated” over 70 percent of the southeastern Zaporizhzhia region, with only the administrative city of Zaporizhzhia and surrounding rural areas still under Ukrainian control. Russia’s Defense Ministry announced on Wednesday that the Ukrainian Motor Sich engine plant was destroyed by a precision missile strike, which would further degrade Ukraine’s long-term industrial output. Further north, Russian military officials said they have launched a counteroffensive to reverse Ukraine’s recent gains in several of the suburbs surrounding the city of Kharkiv.

The Russian military’s recent gains are the latest reflection of what increasingly appears to be an uphill battle for Ukraine’s armed forces in the country’s east. A spokesman for Ukrainian president Volodymyr Zelenskyy told ABC news that Russian forces outnumber Ukrainian troops by seven to one in parts of Ukraine, according to a tweet from ABC correspondent Tom Soufi Burridge. The U.S. government has committed a staggering $53 billion in security assistance to help Kyiv fend off the Russian offensive in Donbas, but it remains to be seen whether or not unprecedented western military aid will be enough to offset Russia’s numerical, logistical, and geographical advantages in eastern Ukraine. Retired Lt. Col. and military expert Daniel Davis told CBC News earlier this week that while ongoing U.S. weapons transfers to Kyiv can raise the costs of Russia’s campaign, they are unlikely to tilt the scales in Ukraine’s favor.