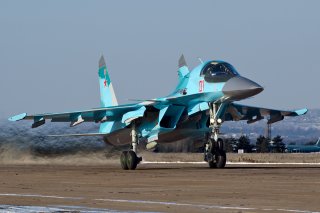 In May 2021 an article in Izvestia reported that the 2nd Aviation Regiment in Chelyabinsk had received the first delivery of a refitted model of its beefy Su-34 supersonic bombers, codenamed the Fullback by NATO and nicknamed the Platypus or ‘Hellduck” due to its distinctive broad, flattened nose.

The Su-34NVO jets are in fact early production Su-34s refitted fighters. At a reported cost of only $1 million each at the Chkalov Novosibirsk Aircraft Plant, the jets will receive new avionics and equipment to support powerful new reconnaissance, electronic warfare, and targeting systems.

Currently, the Russian Air Force (VKS) operates around 120 Su-34s reportedly procured at a cost of 1.05 to 1.3 billion rubles (roughly equivalent to $35 million) each, not counting three lost in accidents.

Seemingly a throwback to Cold War tactical bombers like the F-111 and the Soviet Su-24, the Fullback has a successful combat record in the Syrian Civil War thanks to its combination of sensors, significant range and payload, and its Platan laser targeting system.

The sensor turret allowed the big Russian jet to search for targets and execute precision strikes with laser-guided bombs from a safe, high altitude without requiring assistance from another aircraft or ground forward air controller. Furthermore, the Su-34 can carry air-to-air and air-to-ground weapons on twelve hardpoints and can strike targets up to 2,500 miles away with a full 8.5-ton weapons load, or even further when benefiting from air-to-air refueling.

Unlike most other types of Russian combat aircraft deployed to Syria, not a single Su-34 was lost to accidents or enemy fire. Two Su-34 prototypes also reportedly participated in Russia’s second Chechen War and the Russo-Georgian War by providing escort jamming and precision strike support.

The Fullback at its origin is a heavily enlarged two-seat bomber variant of Russia's Flanker-family of agile twin-engine multi-role fighters. Though the Hellduck’s fighter pedigree is reflected in its capability to surge to around twice the speed of sound at high altitudes and withstand maneuvers exerting more than nine times the force of gravity, it inherits the more comfortable side-by-side seating cabin of the Su-24 making it easier for the crew to endure missions that may last six to ten hours. The Su-34’s second crew member, a Weapon Systems Officer, can take on more efficiently operating the jet’s navigation, sensor, and weapons systems while the other focuses on flying.

While the Su-34 isn’t as nimble as a true fighter, as reflected in its low thrust-to-weight ratio of .68, it retains significantly greater air-to-air combat capabilities than the Su-24 thanks to its sensors and compatibility with modern short-range R-73 heat-seeking missiles and long-range R-27 and R-77 radar-guided air-to-air missiles. That has allowed the VKS to more flexibly dispatch Su-34s armed with air-to-air missiles without fighter escort.

The decision to develop upgraded Su-34s relatively early in its service life reportedly reflects lessons the VKS learned in combat operations over Syria.

First of all, there was the need to further improve the reconnaissance and targeting capabilities that had benefited the Su-34 so much. The second issue was that losses of older Russian-built jets to surface-to-air missiles and Turkish fighters emphasized the need for more powerful jamming. Already since 2011, Russia has been replacing wingtip L175V jammers with more powerful K265 Khibiny-M systems.

Here the Su-340NVO upgrade likely drew on concept work for two proposed but unrealized Su-34 variants: a Su-34R reconnaissance jet to succeed the Su-24MR reconnaissance jet, and a jammer-laden Su-34MP electronic warfare platform, which would have provided long-range jammer support in a similar fashion to the U.S. Air Force’s retired EF-111A Raven electronic warfare jets. Rather than develop specialized aircraft, the new solution is to make the basic Su-34 even more flexible.

The key new feature introduced in the Su-34NVO is compatibility with interchangeable UKR pods slung under the Su-34’s underbelly, between the engines. The system is collectively known as the Baseline Reconnaissance Complex-3 (BKR-3). While the three pods mount different types of sensors, they share a common databus and all can transmit their findings via a wide-band datalink in real-time to friendly aircraft and command centers.

The UKR-OE variant pairs an M433 Raduga-VM infrared scanner with an Antrakt camera system. The UKRT radio-technical model uses an M410 electromagnetic sensor (miniaturized from the M400 used on the Tu-214R surveillance plane) designed to snoop on and geolocate the radar signals of other country’s military systems.

Finally, the UK-RL pod embeds an M402 Pika-M side-looking radar which can scan for air, maritime, and ground objects at ranges of 180, 60, and 30 miles respectively, has high-enough resolution classify tracks by type, and which is also touted as improving the Su-34’s all-weather capability by ‘seeing’ objects in low-visibility conditions.

As for the EW upgrade, technical details are more scarce, but supposedly a new, more powerful variant of Khibiny will allow the Su-34M to provide escort jamming, ie. protection for other nearby aircraft, rather than serving purely for self-defense. It’s possible the EW may also refer to fleet-wide integration of an L700 or SAP-14 Tarantul escort jamming pod, which you can see photographed on an Su-34 here, or a special Khibiny pod designed to foil the more powerful radars used on AWACs early-warning aircraft.

The Su-34NVO also is vaguely alluded to as being compatible with additional types of guided weapons, though the Fullback already was compatible with a very wide variety. The new weapon is believed to refer to integration of the Kh-101 and nuclear-tipped Kh-102 stealth cruise missile currently hefted by Russian Tu-95MS and Tu-160 bombers, which combat-tested the Kh-101 in Syria. It’s assessed that a Su-34 could carry two, implying the Su-34 may have acquired an expanded role as a nuclear strike platform.

In May 2020 Moscow also placed an order for seventy-six brand new Su-34Ms to fully replace the Su-24 jets still in VKS services. A prototype is planned to fly in 2022, and deliveries of production Su-34Ms are expected in 2027 with a production rate of eight to fourteen aircraft per year, resulting in a total fleet of around 200 Su-34s.

The Su-34M will feature new technologies in addition to the capabilities introduced on the SU-34NVO upgrade, including a modernized K-102M navigation/attack and Sh-141M radar subsystems, an Elbrus microprocessor, new cockpit displays, and an open-architecture computer system. While the Su-34’s AL-31F engines will remain unchanged, a new radar is also envisioned, though details are scarce.

For all its efficiency in a counter-insurgency context in Syria, as a non-stealth aircraft, the Su-34 would undoubtedly face stiff challenges if used in a high-intensity conflict due to its visibility in radar and mission of penetrating defended enemy airspace to strike key targets behind the front line.

Russia is ushering into service Su-57 stealth fighters and Okhotnik-B stealth drones which could perform some of these high-risk penetration missions, but there will not be enough, and they lack the range and payload to offer a substitute for the Fullback.

In such a high-threat environment, Fullbacks would rely on skimming close to the Earth using their radar’s terrain-avoidance capabilities and surging to supersonic speed to shrink the reaction time of hostile air defenses batteries and fighters as much as possible. The addition of more powerful EW systems in the Su-34NVO and Su-34M surely reflect additional effort to mitigate the dangers that mission entails for Russia’s unique supersonic fighter bomber.