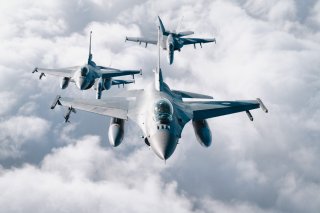 NATO forces recently concluded Neptune Strike, a vigilance activity designed to increase the alliance’s interoperability and ability to deter aggression. A statement released by the U.S. Navy explained that the exercise is intended to prevent “adversaries and terrorist groups from spreading destabilization, widening disorder, or accruing decisive military advantage that would impact allies’ security.”

“Neptune Strike sits at the leading edge of NATO's vigilance activities, providing credible deterrence, and demonstrating the inherent flexibility of the carrier strike group while building high-end interchangeability among our NATO allies and partners on a firm foundation of trust,” said Vice Adm. Thomas Ishee, the commander of both the U.S. Navy’s Sixth Fleet and Naval Striking and Support Forces NATO (STRIKFORNATO).

“The energy across the entire Naval Striking and Support Forces NATO team was palpable as we pushed the bounds of allied integration in the land, air and on the seas,” Ishee added.

With the flames of war still alight in Ukraine, NATO’s European allies are rapidly investing in a plethora of military hardware as well as prepping for a potential wide-scale conflict on the continent.

“Neptune Strike has again offered a perfect opportunity to fully integrate the combat power of a U.S. aircraft carrier into enhanced Vigilance Activity in direct support of NATO's commitment to deter conflict and defend allies. It has offered the chance to combine capabilities from a large number of nations in all warfare domains - on land, at sea and in the air - as a clear demonstration of allied unity of purpose and cohesion,” said Royal Navy Rear Adm. James Morley, the deputy commander of STRIKFORNATO.

“It has further rehearsed STRIKFORNATO's role as the primary integrator for U.S. maritime combat power. The George H.W. Bush Carrier Strike Group is now even better prepared to execute complex missions in concert with wider allied efforts to defend the Euro-Atlantic area,” he added.

Cognizant of the potential challenge posed by a revanchist Russia, NATO countries have thrown their defensive weight behind Ukraine’s embattled military to decisive effect. And while the United States has been the biggest supporter of Ukraine on a per-dollar basis, some other countries, the Baltic states in particular, have donated significant percentages of their defense budgets to Kyiv in the form of aid and military hardware.

NATO chief Jens Stoltenberg explained that “[Neptune Strike 2022] is a perfect example of the transatlantic bond – Europe and North America working together in NATO.” Stoltenberg continued: “[NATO’s] strength helps to prevent any miscalculation by sending a clear message: NATO will protect and defend every inch of allied territory.”