Russian Forces Still Plagued By Issues in the Donbas Region 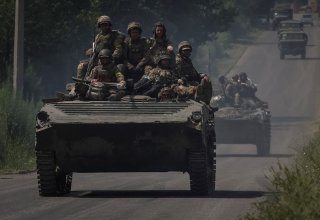 In the early days of the Russo-Ukrainian war, Russian forces north of Kyiv were stuck in the mud, plagued by morale problems, low on supplies, and decimated by Ukrainian anti-armor attacks and ambushes.

The Russian push southward to capture Kyiv was also a failure. This development shocked the world and shed light upon the fervor and tactical prowess of Ukrainian forces fighting to defend their homeland. During this initial siege, Russians not only had logistical problems and suffered devastating ambushes and hit-and-run attacks by Ukrainians, but also suffered what could be called a morale crisis. There were countless anecdotal reports of Russian soldiers abandoning their vehicles and lacking the will to fight a war in which they could see little to no benefit.

Following what could be called a debacle for Russian forces, there was much discussion about a repositioning of Russian troops and a strategic shift to focus on the Donbas region in eastern Ukraine. Pentagon officials said Russian forces appeared to have learned lessons from their failures North of Kyiv and be in a much stronger, better prepared, and more consolidated position to advance on Ukrainian forces in eastern Ukraine. While the Ukrainian tenacity continued to be applauded by allies around the globe, many observers may have predicted that an overwhelmingly larger, heavily mechanized armored Russian force would advance successfully in Donbas.

“So the Ukrainians are fighting a heroic fight. This fight down in the Donbas has been going on since 16 April, and the advances that the Russians have made have been very slow, a very tough slog, a very severe battle of attrition, almost World-War-I-like, and the Russians have suffered a tremendous amount of casualties,” Chairman of the Joint Chiefs of Staff Gen. Mark Milley told an audience at NATO headquarters in Brussels, Belgium, at a Defense Contract Group involving countries sending military aid to Ukraine.

Many leading U.S. military experts have pointed out that Russia lacks proficiency in implementing Combined Arms Maneuver. Yet, the sheer amount of firepower available to the Russian military might lead one to assume that their attacking forces would ultimately prevail. However, Pentagon leaders say Russian forces are experiencing some of the same problems they encountered at the beginning of the war before repositioning to the Donbas region.

“They've got command-and-control issues, logistics issues. They've got morale issues, leadership issues and a wide variety of other issues,” Chairman of the Joint Chiefs of Staff Gen. Mark Milley told an audience at NATO headquarters in Brussels, Belgium.