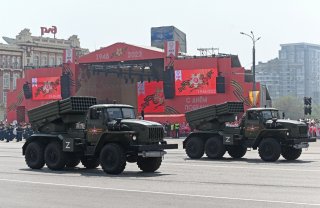 Having failed in his initial plan to conquer Ukraine, Vladimir Putin decided to go for half a loaf: control of Eastern Ukraine. However, he is now also failing there as well. The burning questions before us are what will Putin do next and what must we do?

Putin’s failure in Eastern Ukraine is manifesting itself on the battlefield. The continued stiff Ukrainian resistance in Mariupol has become a source of embarrassment for Russia: the sinking of the Russian flagship Moskva; the killing of a dozen or more Russian generals; and the successful Ukrainian push to liberate Kharkiv … all speak for themselves.

Putin thought he had timed his invasion carefully, judging incorrectly that the U.S. presidency was weak and the American public was too war weary to intercede in Ukraine. He believed NATO was fractured and could not muster a unified response. All his assumptions were wrong.

It now appears things will further worsen for Russia. Ukrainian determination and widespread outrage at Russian brutality have burnished the commitment of the West. We are now willing to take more risks than during the early stage of the war. Modern weapon systems such as 105mm and 155mm howitzers are proving particularly effective in repelling Russian forces in flat areas. Technical help and training from our allies and partners are increasing the Ukrainian ability to defend themselves and inflict significant costs on Russian forces. All of this is contributing to significantly slowing Russian progress in Donbas. In yet another mistaken assumption, Putin believed that Western assistance would not make a qualitative difference in the war.

First, stick with his current approach for the foreseeable future in hopes of eroding Ukrainian morale and resolve over time. And further, hoping that the West will grow tired of supporting Ukraine. Such a “hope-based” approach is unlikely to turn the tide for a Russian victory. It has the added feature of getting Russia stuck in a Ukrainian quagmire, similar to what happened to the Soviet Union in Afghanistan. Discontent with the war would grow as casualties increase and as the drag on the Russian economy extends. This path would pose significant opportunity costs for Putin, especially given the economic isolation he faces in the light of a growing international sanctions regime. As it stands now, Russia is cannibalizing kitchen appliances for circuit boards and taping consumer-grade GPS units to the dashboards of fighter jets. As materiel losses increase, this will only get worse. This is not a promising option.

Second, Putin could decide to escalate. He could annex Donbas into the Russian Federation similar to Crimea, declare war in defense of Russian territory, and order a general mobilization. He may then assume that such a bold step would affect Western support for Ukraine and divide the Western alliance.

Another escalation option that Putin might contemplate is to carry out a conventional strike against a neighboring NATO country with the purpose of discouraging the provision of further materiel support to Ukraine. NATO must be prepared for such an escalation. It should have proportional response options spring-loaded for employment with “lightning speed,” as Putin likes to threaten. Failure to respond swiftly would risk encouraging Putin to go forward with more such attacks aimed at undermining the credibility of the alliance.

The most serious form of escalation would be a limited nuclear strike aimed against Ukraine, against a NATO country, or against the United States. There are advocates within Putin’s circle of advisors for such action, but is it likely? It seems conceivable that the Russians might consider the use of a nuclear weapon against an isolated Ukrainian military target. The aim of such a strategic strike would be to both terrorize Ukraine and, more importantly, scare Europeans into believing the war has become too dangerous, and making all sides willing to seek an end to the war on terms that are favorable to Russia.

This option—a nuclear strike—is the most dangerous for Putin and would not fit the pattern of Russian military behavior. Our intelligence leaders say they do not see any Russian preparations for such an attack. Nonetheless, Putin has threatened it. It may be pure bluster, or he may miscalculate again; consequently, the possibility of Russian employment of nuclear weapons cannot be entirely dismissed.

Third, he can accept a political settlement. His mindset and his assessments are a matter of speculation. We do not know whether Putin realizes the extent of his miscalculations, or even if he clearly recognizes and is reliably briefed about his military failure. We don’t know if he is looking for an exit strategy and considering options to seek an agreement with the Ukrainian government or the United States. We do know that President Volodymyr Zelenskyy has repeatedly stated that he favors a diplomatic settlement, though as the damage to his country increases, the reports of human rights violations mount, and the Ukrainian military continues to do well, the Ukrainian posture might well harden.

What Should the United States do?

The United States and its allies must seek to deter Russian escalation and, if deterrence fails, prevent it from succeeding. This means continuing to stand with and support Ukraine. In order to deter escalation, the United States must make it clear that not only will it reject any annexation, but also it will also continue to support and even increase its military support to Ukraine.

On deterring the use of nuclear weapons against Ukraine, Washington must indicate that such a step will bring retaliation such as obliterating a Russian formation in the Black Sea or targeting a major Russian land formation in Ukraine. These responses need to be reviewed and preparations made. The United States must also make it clear that a nuclear strike will lead to complete international isolation of Russia, including by China, India, and other nations who have, to date, remained ambivalent to Putin’s war.

It follows that Washington must resolutely engage these ambivalent nations on this point. Although some of these nations may see the U.S. approach as fear-mongering, it is important that they know right now that the United States takes the issue very seriously.

On the military front, any use of nuclear weapons should result in the provision of weapons to Ukraine that up to this point have been held in abeyance, to include fighter aircraft, along with reconsideration of the establishment of a no-fly zone over government-controlled areas.

On the economic front, the use of nuclear weapons should result in cutting the remaining parts of the Central Bank of Russia from the SWIFT system and a total ban on the import of Russian goods and services including oil and gas.

It is also important that we begin considering what outcome we should seek in the conflict and what role we can and should play in achieving it.

Given the unfolding military realities, one option would be to support the continuation of the war and inflict increasing costs on Russia until Russian forces are expelled from Ukraine, including Crimea, and Putin is replaced. Seeking such an outcome, although emotionally satisfying, would be overreach. It will prolong the war, divide the alliance and undermine international support. Most importantly, it risks escalating the conflict.

A less risky option for ending the war is to help Putin come to terms with his military defeat. He and his team should understand that while the failure of this military adventure is hard to accept, things will get much worse if they continue and devastating if they escalate; the message being that it is time to cut their losses. They should recognize that if Putin escalates, regime change may well be on the table.

Conversely, in exchange for ending the war and returning to a status quo ante, without Ukraine relinquishing its sovereignty, independence, or territory, Russia would receive international acceptance of its legitimate security concerns, including Ukraine’s already announced commitment not to seek NATO membership, and gradual removal of recently imposed sanctions. Before starting to discuss the terms for ending the war with Russia, the United States must do so with Ukrainians and its allies and reach an understanding. There would also have to be a massive international commitment to Ukraine’s reconstruction and its security going forward.

The choice that the United States makes is vital. And it has to be made in coordination with Ukraine and its NATO allies. Equally important will be the U.S. role in dealing with the Russians about the end of the war. Friday’s call by Secretary of Defense Lloyd Austin to his Russian counterpart is a helpful first step in bringing an end to this war. In Putin’s mind, the United States is Russia’s only counterpart “at eye level.”