Can Russia and the West Survive a Nuclear Crisis in Ukraine? 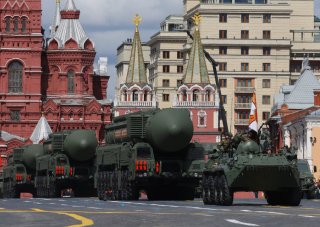 The Russo-Ukrainian War may soon produce a major U.S.-Russian nuclear crisis. Despite President Joe Biden’s occasional cautionary remarks that he understands the risk of nuclear escalation in the event of a direct clash between U.S. and Russian forces, there are other ways that a very dangerous moment can emerge. Widespread optimism about our ability to avoid such an outcome depends greatly on the assumption that both sides are very cautious where nuclear weapons are concerned and have assimilated that caution into their conduct of the war. This is false.

The critical tools for the avoidance of escalation of any war are the limitation of ends and the limitation of means. These tools are disappearing fast. It is apparent from leaks in several media outlets that the United States is itself deeply involved in the Ukrainian war effort. We are providing billions, and soon tens of billions of dollars in military assistance, and this assistance seems likely to involve ever more sophisticated and longer-range weapons. We are providing the Ukrainians with intelligence to support defensive and offensive operations, such as the sinking of a major Russian warship. Even the defensive intelligence assistance has supported provocative actions. Russian officers at the front are legitimate and useful targets for Ukraine, but not for us. Yet, the United States has apparently assisted these efforts.

Ukrainian forces seem to be raiding across the Russian border. From a strictly military point of view, this makes sense. From the point of view of escalation control, this sacrifices a critical and useful firebreak. Russia does not raid Ukraine’s sources of resupply across the border of NATO countries; Ukraine should not raid the Russian army’s source of resupply in Russia. It does not help that senior British officials have applauded the idea of these raids. Russia’s sponsorship of assassination attempts on British soil certainly deserves some payback. Britain has gotten its payback through the extraordinary tactical success of the anti-tank guided missiles they have supplied to Ukraine. The British, of all people, should remember the meaning of “a bridge too far.”

Meanwhile, senior U.S. officials have touted vastly expanded war goals, beyond helping Ukraine to defend itself from Russian conquest. Secretary of Defense Lloyd Austin has declared an intent to radically weaken Russia to the extent that it could muster no offensive striking power for years to come. Secretary of State Antony Blinken has signed on to the complete recovery of all Ukrainian territory occupied by Russia, a goal that is only possible if Ukraine is sufficiently well-armed to mount powerful counter-offensives against Russian forces. Speaker of the House Nancy Pelosi has simply declared that we will support Ukraine until victory.

Politically and militarily, the United States is deeply engaged in Ukraine’s war effort, and is now supporting maximalist Ukrainian war goals, along with maximalist war goals of its own. Yet, the administration still seems to think that Russian escalation is unlikely.

Russia still has many cards to play, from the mobilization of large numbers of reservists to an expansion of conventional attacks on civilians and economic infrastructure. That said, one can imagine circumstances in which the “tactical” use of nuclear weapons to achieve battlefield effects might seem reasonable, even though Russian president Vladimir Putin and his advisors surely know that this is risky business. The main problem is that we do not know the current true state of Russian or Ukrainian military forces. What we do know is that Ukraine, the United States, the UK, and some NATO European allies all seem a bit cocky. We do not know if this is simply a kind of natural enthusiasm that arises after a victory like the Battle of Kiev or something more fundamental—a belief that Russia’s fielded forces may be on the verge of collapse. In normal times, we would celebrate this outcome. Against a nuclear-armed adversary, fighting for stakes that it obviously considers to be very high, there is however such a thing as an “excess of success.”

It is not hard to imagine what a “theater nuclear” war plan might attempt. The Russians have surely already drawn one up. They would identify their problem as the fountain of U.S. and European weapons reaching Ukrainian forces at the front. They have attempted in recent days to “interdict” this flow of weaponry by attacking railroad infrastructure and airports. But historically, even very good air forces have found interdiction to be a challenge. And Russia only has a mediocre air force. Nuclear strikes with “low yield” weapons on bridges, railroads, and airfields would make it much harder for Ukrainian forces to resupply themselves. Selected strikes against Ukrainian military forces in the field would take the pressure off Russian units. Tactical nuclear targeting was once a high art in both NATO and the Soviet Union. Common sense and a map suggest that even a half dozen attacks could make a difference, but given that today’s Russian army is clearly the descendant of the Soviet Army, their style of military planning would suggest several dozen targets. Ukraine has no nuclear weapons; it cannot respond in kind. Ukraine is not a NATO ally; no other country is committed to the nuclear defense of Ukraine. The Russian leadership may, if the conventional war goes badly enough, reach for a nuclear trump card. We should think hard about what even their preparations for such an attack would set in motion.

During the Cold War, the main task of U.S. intelligence was to watch Soviet nuclear forces. U.S. intelligence agencies are no doubt now watching all Russian nuclear forces intently. Russia would face difficult choices were it to consider tactical nuclear strikes. Moscow might hope to prepare such strikes in secret, but it seems unlikely. U.S. satellites watch their nuclear bunkers and nuclear units. Unusual activity will set off alarm bells. This activity will involve communication. The Russians surely have command networks for this eventuality that they have not revealed in peacetime. But U.S. intelligence collectors will be looking for any unusual patterns of communications traffic, even if we don’t quite know what it says, or even what it is. The Russians are operating at home and can do much of this through landlines. But even landlines may not be secure. The Russians need to worry about what the United States will do with this warning.

Among other things, the Russians need to worry about the rest of their nuclear forces. The mobilization of their tactical forces starts a nuclear crisis well before any weapons are launched. Will their strategic nuclear forces remain inert and unalerted in order to convey a sense of limitation to us? Or will they worry that we will worry, and alert our strategic nuclear forces before they can alert theirs? This matters because more of our forces are “ready” at any one time than theirs. If they delay, and the matter escalates, they know they will be at a disadvantage. Among other qualities of the Russian nuclear forces is the fact that most of their nuclear-powered ballistic missile-carrying submarines (SSBNs) are in port. They rely on these weapons, once they are at sea, to endure a feared U.S. nuclear first strike and survive to retaliate. In a crisis, they will think about sending these boats to sea to ensure that the United States is deterred. The United States watches their ports all the time. An “SSBN surge” will set off alarm bells in the West. One of the reasons we watch their ports is because the U.S. Navy has long hoped to catch these vessels as they deploy and establish trail with our nuclear-powered “hunter-killer” attack submarines. In the event of war, our attack submarines would try to destroy the Russian forces in order to prevent them from firing their weapons at the United States To do so, of course, U.S. subs have to get to the Russian ports in the Arctic and the Pacific quite early in a crisis. It would not take much to produce a tense interaction between Russian and U.S. submarine forces. How these interactions might unfold in a crisis is quite difficult to predict.

Even if the Russians were very restrained in the alerting of their strategic nuclear forces in support of their theater nuclear strike, the United States would be sorely tempted to do something to try to deter an expected Russian attack. But one wonders what American planners will dream up. They failed to deter the Russian attack on Ukraine with the threat of extreme sanctions and the implied threat of additional arms supplies to Ukraine and the very strong likelihood of a NATO buildup on its eastern borders. Russia clearly thinks its vital interests are at stake. The United States won’t make nuclear threats, but it will be tempted to make some kind of threat.

More importantly, even if the United States does not alert its strategic nuclear forces and NATO does not alert its own theater nuclear forces, the general level of military alert in the West will surely go up. In particular, intelligence collection activities, which are already quite intense, will ratchet up even further. All around Ukraine, and indeed, all around Russia, U.S. intelligence collectors, including submarines, patrol aircraft, and drones will be even more active than presently. Western fighter aircraft, no doubt already flying more defensive patrols, would further increase their efforts. The Russians will not fail to observe these activities, which could themselves drive additional Russian preparations.