Israel Is Hardly ‘Indifferent’ on Ukraine 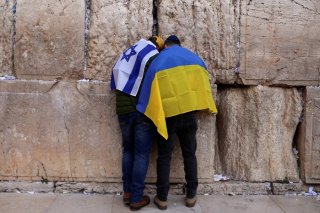 Israel’s response to the war in Ukraine has encountered withering criticism from without and within. In a speech to the Knesset, Ukrainian president Volodymyr Zelensky charged that “indifference kills.” The Washington Post, in a lead editorial, singled out Israel and just a few other states, for hedging. A senior former Israeli diplomat and astute observer, Alon Pinkas, decried Israel’s “immoral and imprudent policy.” Shlomo Ben-Ami, a former Israeli foreign minister known for his wisdom and moderation, was even more scathing, arguing that Israel’s moral and strategic considerations align in Ukraine, that it can thus unequivocally support the Western position, and that the price to be paid would be a mere “tactical” loss of Israel’s freedom of maneuver over Syrian airspace.

A clear majority in Israel would like to come out staunchly and unequivocally in favor of Ukraine. Not only was Russia the clear aggressor, but its cruel indifference to fundamental norms of behavior, and war crimes, leave little desire for evenhandedness. Russia should be punished.

National leaders, however, do not have the luxury of stating their feelings quite so clearly. There are critical interests at stake. The war will have far-reaching ramifications for the entire global system, including the U.S.-Russian-Chinese balance of power, Israel’s relationship with the United States and place in the world, and Russia’s role in a variety of areas of great importance for Israel. This is most certainly not a matter of mere tactics for Israel, but one of foremost strategic importance and it requires a prudent and cautious hand at the tiller.

Israel’s initial response in support of Ukraine was, indeed, a few days behind the international community and it refused to support a United States Security Council resolution condemning Russia. Prime Minister Naftali Bennett has intentionally left it to his foreign minister and intended successor, Yair Lapid, to stake out a vocally critical position of Russia, whereas he has spoken in more moderate terms, designed to minimize the blow to Israel’s relations with it. Israel has refused to provide Ukraine with weapons of any kind.

Three questions arise: whether Israel’s response has been significantly different from that of most countries, whether its unique national history, drawing on millennia of Jewish weakness and persecution, culminating in the Holocaust, imposes upon it a special moral burden and, finally, what more could it actually do.

The fact that much of the Holocaust took place in Ukraine makes these questions especially poignant. If, however, one looks at things openly, without predispositions, the Israeli response to date has been reasonable and in accord with others. Israel did not support the condemnation of Russia in the Security Council, which Russia vetoed in any event, but did support two General Assembly resolutions and joined in the call for Russia’s expulsion from the Human Rights Council.

In practical terms, Israeli assistance has been significant, especially in the medical area. It provided Ukraine with a fully equipped and staffed 150-bed field hospital, for a period of six weeks, which treated over 6,000 patients. It further provided six large generators for a Ukrainian hospital, ten ambulances, and 100 tons of humanitarian assistance, including food, clothing, and water purification equipment. It admitted 24,000 refugees, of whom two-thirds are not Jewish.

In the military area, Israel’s response has been less forthcoming. Until mid-April, it refused to provide military assistance of any kind, offensive or defensive, including the Iron Dome anti-aircraft and anti-missile system. As the war evolved, Israel began modifying this position, with the announcement that it would provide Ukraine with protective gear, such as helmets and vests, and its participation in a U.S.-led international forum designed to provide Ukraine with ongoing military and other assistance. Israel reportedly already conducted intelligence cooperation with Ukraine. An interagency team is now exploring ways of increasing assistance.

This response may not be fully satisfying, many of us would like to strike out, but other states have weighed their strategic considerations with similar care. The United States has truly risen to the occasion and responded magnificently, but it, too, has set clear limits on its assistance. Ukraine is not a NATO ally, so no U.S. forces would be sent to directly defend it or be deployed in its territory. A no-fly zone would not be imposed. The United States would do everything it could to avoid a direct clash with Russia and possible World War III. As U.S. confidence in its ability to aid Ukraine without sparking a war with Russia has grown, the nature of American military assistance evolved. Now that the tide has changed, American strategists fear the consequences of overly strong assistance to Ukraine and of pushing Putin into a corner.

Germany, after weeks of indecision, is now providing modest military aid to Ukraine. France has provided limited economic assistance and only minimal military aid. Both have emphasized the importance of avoiding a direct conflict with Russia, implicitly indicating the limits to their support. The European Union, which blithely ignored the dangers of its growing energy dependence on Russia for years, and still pays it $1.1 billion each day for oil and gas, has been reluctant to increase sanctions on Russia.

Japan, dependent on Russia for 8 percent of its electric power, had provided Ukraine with just $28 million worth of humanitarian aid, as of early April. South Korea recently pledged $30 million in support but had only actually provided a meager $800,000 in nonlethal military and humanitarian aid. The list goes on. When grappling with a raging bear, even major powers act with caution.

In the end, a state’s policy is not just a question of how it and its allies perceive it, but even more importantly, how it is perceived by the target state. At least as far as Russia is concerned, there is no room for misinterpretation. Israel has placed itself squarely in the U.S. camp and Russia has begun expressing its displeasure in clear and threatening terms.

Israel, Russia avers, is “still” a friend, but one from which Russia expects more. In what may warrant first prize for chutzpah, Russia decided that this was the appropriate time to condemn Israel’s occupation of the Golan Heights, an area 0.29 percent the size of the Ukraine. It further placed the blame for the recent violence in Jerusalem entirely on Israel, accused Israel of trying to divert international attention from its own misdeeds, and expressed its diplomatic support for the Palestinians generally. Even more ominously, a Russian general implicitly threatened Israel’s freedom of area maneuver over Syria. So, “still” friends, but conditionally.

Israel has very good reasons for wishing to avoid a confrontation with Russia, which are highly reminiscent of those of the great powers above. Russian S-400 anti-aircraft systems, already deployed in Syria, could inhibit and even shut-down Israel’s efforts to prevent Iran from turning Syria into a forward operating base against it and a transit point for the delivery of highly advanced weapons to Hezbollah in Lebanon. Hezbollah already has a gargantuan arsenal in Lebanon of some 150,000 Iranian-supplied rockets aimed at Israel, and Iran is now trying to replicate it in Syria and build up its own military capabilities there.

Russia has been a partial counterbalance to Iran’s growing influence in Syria and has helped contain the situation, at least somewhat, by pressing Iran and Hezbollah to keep their forces away from Israel’s border. Even more importantly, an agreement with Russia has allowed Israel to operate over Syrian skies without fear of the S-400s, but this could change at any time of Russia’s choosing. In the next round with Hezbollah and Iran, Israel’s home front will likely suffer devastating damage, of a magnitude that it has never experienced before. Russia has the ability to affect just how bad it is. For Israel, these considerations are most certainly not a matter of “petty” tactics, but actually the greatest threat to its national security today, short of a nuclear Iran.

Russia is an important player in regard to the Iranian nuclear issue, as well, where it is a party to the nuclear agreement and negotiations in Vienna. Barring an unexpected change in U.S. retrenchment from the Middle East, following the war in Ukraine, Russia is likely to remain the primary superpower in the region, even if a weakened one. A superpower that has concluded sales of major weapons systems and nuclear power reactors to Turkey and Egypt and has held negotiations in this regard with the Saudis and others.

Approximately 15 percent of Israel’s population was either born in the former Soviet Union, or are the descendants thereof, and about 600,000 Jews still live in Russia and 200,000-300,00 in Ukraine. Their ability to emigrate to Israel, or simply remain in contact with family members and friends, is critical for Israel.

For all of the above reasons, Israel has very good reasons for not wanting to anger the Russian bear. Nevertheless, the entire world is gearing up to help Ukraine, the United States is leading an unprecedented international alliance, and Israel must be able to do more. Some have suggested defensive weapons or at least defensive cyber capabilities.