What Will U.S.-Supplied Howitzers Mean for the Battle of the Donbas? 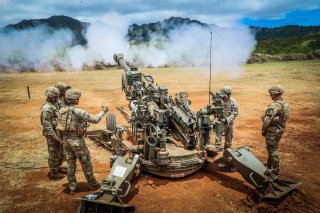 Once U.S. experts have a chance to “train the trainers” outside of Ukraine, Ukrainian forces will be firing U.S. Army and Marine Corps artillery in a matter of days, Pentagon officials say.

Pentagon spokesman John Kirby was clear to emphasize that U.S. military personnel will not go into Ukraine to train the Ukrainians on how to use the artillery. Instead, they will train a group of Ukrainians with the weapons outside of the country.

“Training will occur outside of Ukraine. It'll be more of a train the trainer's kind of environment. So, it'll be a small number of Ukrainians that will be trained on the howitzers. And then they will be reintroduced back into their country to train their colleagues,” Kirby told reporters on Tuesday. The training should not be too laborious, Kirby said, in large part because there are many commonalities between most kinds of artillery.

In effect, Ukrainians will now be able to bombard Russian forces from safe distances. However, the ultimate effectiveness of the artillery may largely rely on how well the Ukrainians can carry out targeting and surveillance. Should ground-based radar, fire control systems, and artillery be networked with drone video feeds near Russian troop locations, artillery shells can be accurately directed at those locations.

Artillery of any kind is likely to be of great help to Ukraine, but being able to fire precision rounds would be particularly impactful. Details related to the kind of ammunition or artillery targeting systems being given to Ukraine are not likely to be available for security reasons, but GPS-guided precision artillery has been used in combat by the U.S. Army since 2007. Given that the ability to guide 155mm rounds has existed for many years, it is within the realm of possibility that the Ukrainians might be able to pinpoint high-value Russian targets from significant standoff ranges. An ability to do this would also rely on the fidelity, range, and speed of networking technologies and the specifics with which target details can be quickly transmitted. Regardless, a more heavily armed Ukrainian force might be positioned to thwart Russia as the battle for the Donbas heats up.