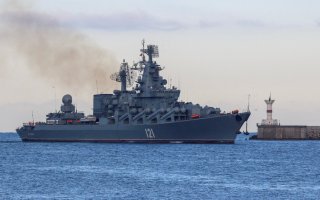 “On June 30, as a step of goodwill, the Armed Forces of the Russian Federation completed their assigned tasks on Snake Island and withdrew the garrison stationed there. Thus, it was demonstrated to the global community that the Russian Federation does not interfere with the efforts of the UN to organize a humanitarian corridor for the exports of agricultural products from Ukrainian territory,” Russian Defense Ministry spokesman Igor Konashenkov announced on Thursday.

“This decision will prevent Ukraine from speculating on the subject of the impending food crisis, citing the impossibility of shipping grain due to Russia’s total control over the northwestern part of the Black Sea,” Konashenkov added, according to Russian state news outlet TASS.

Whereas Moscow is framing the withdrawal as a gesture of goodwill intended to stave off a looming global food insecurity crisis, Ukraine says it drove Russian forces from the island after an overnight assault and artillery strike. "The enemy hurriedly evacuated the remains of the garrison with two speed boats and probably left the island. Currently, Snake island is consumed by fire, explosions are bursting,” said Ukraine’s military, according to Reuters.

“KABOOM! No Russian troops on the Snake Island anymore. Our Armed Forces did a great job. More kaboom news to follow. All [occupied territory] will be Ukrainian,” tweeted Head of the Office of the Ukrainian President Andriy Yermak. Ukraine’s account of the events leading up to Russia’s withdrawal from Snake Island has not been verified by outside observers.

Russia’s military captured Snake Island, a small Ukrainian outcrop to the southwest of the port city of Odessa, in the opening stages of its invasion of Ukraine. Ukrainian troops launched several efforts in May to retake the island but were repeatedly repelled by Russian forces. Buoyed by recent shipments of Western anti-ship missiles and artillery systems, the Ukrainian military reportedly launched a renewed assault on Snake Island in recent days. Satellite imagery of the island dated June 21 appeared to show evidence of new strikes in the form of large scorch marks, with Ukraine claiming to destroy scores of local Russian vessels and anti-aircraft systems in recent days.