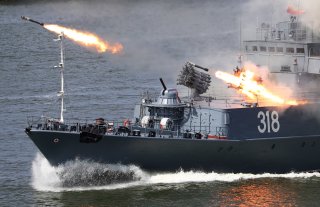 This month the Russian Navy’s Pacific Fleet’s frigate Marshal Shaposhniko (BPK 543), which was recently upgraded to employ Kalibr and Uran cruise missiles, left the port of Vladivostok to continue its shipbuilders’ sea trials in the Sea of Japan. The warship had undergone its refit and upgrade at the Dalzavod Ship Repair Center in the city in Russian Far East.

“The crew and specialists of the Dalzavod Ship Repair Center checked the operation of the ship’s main propulsion unit, systems and mechanisms in various modes, including at the maximum speed. Following the results of its deployment to the sea, a decision will be made on the timeframe of holding the next stages of trials, in particular, the take-offs and landings of shipborne Ka-27 helicopters on the frigate’s deck,” the Pacific Fleet’s press office said on Thursday, as reported by state media.

In addition to anti-submarine warfare and air defense capabilities, the frigate received Kalibr-NK and Uran cruise missile launchers and advanced artillery armament during its refit. During the upgrade, the shipbuilders dismantled and reconstructed more than 20 percent of the frigate’s superstructure, and the vessel’s main cables were partially replaced. The shipbuilders also repaired the frigate’s sea valves and hull structures and installed new equipment, and the warship is set to rejoin the Pacific Fleet by the end of this year.

The Marshal Shaposhnikov is named for Boris Mikhaylovich Shaposhnikov, a Soviet military commander who served as Chief of Staff of the Red Army and Marshal of the Soviet Union. He had previously served as a colonel in the Caucasus Grenadiers division in the Imperial Russian Army during the First World War, but in 1917 supported the Russian Revolution—an unusual move for a career soldier of his rank. He joined the Red Army in May 1918 and was actually one of the few Red Army commanders with formal military training.

The warship, which was laid down in 1985, entered service with the Russian Navy as a large anti-submarine warfare (ASW) ship, but with its upgrades, including the shipborne launchers for the Kalibr-NK and Oniks missiles, it has increased combat capabilities and is now qualified as a frigate.

The Kalibr-NK cruise missiles, which are fired from an eight-tube UKSK vertical launching system (VLS), are land-attack cruise missiles that have a range of 1,500 to 2,500 kilometers.

Future upgrades include the addition of Tsirkon hypersonic missiles.

The Russian warship, which serves in the Russian Pacific Fleet, has undertaken operations to combat piracy off the Somalian coast and helped liberate the motor tanker MV Moscow University after the vessel was attacked and seized by pirates east of Socotra Island in May 2010.

Following the upgrade of the Marshal Shaposhnikov, all seven of the additional Project 1155 warships will be slated for a similar modernization.