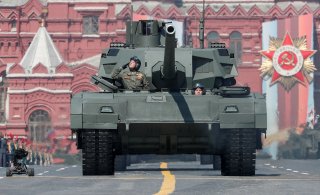 Even before the so-called “Scramble for Africa” of the late nineteenth-century, many European powers had a well-established presence in Africa—including some with benign-sounding terms such as “interest” or “protectorate.” But after the Berlin Conference of 1884-85, Africa was carved up and much of the continent were conquered as outright colonies. Even small nations such as Belgium and Portugal had vast African domains, but one notable European “empire” that had almost no presence in Africa was Russia, which was largely focused expansion across Asia and to the Far East.

Throughout the Cold War and into the modern-day, Russia has been a major arms supplier to the African continent.

Now in the twenty-first century, Russia is apparently one of the powers that seeks to expand its presence in Africa with military bases.

According to a secret German Foreign Ministry report titled “Russia’s New African Ambitions,” which was first reported in the media last week by the German daily Bild, Russia sees Africa as a top priority—not for outright colonies but rather as a region for its military bases. One important part of this advance for Russia into Africa is military cooperation with some of the continent’s most brutal dictatorial regimes.

Since 2015, Russia had concluded military cooperation with twenty-one African countries—and has openly sought permission to establish military bases in six nations, including Egypt, the Central Africa Republic, Eritrea, Madagascar, Mozambique and Sudan. Prior to the agreements with those twenty-one countries, Russia had agreements with just four countries in Africa, and that included the formal (but also secret) training of military forces.

The German report stated that Russia would not only send officers to those nations for training, but would invite soldiers from Africa to train in facilities in Russia. It is also operating training programs via private security contractors such as Wagner—a fact Moscow has previously denied.

This could be a “win” for the African powers, as this could involve increased training opportunities from the Russian military, but could also be a way for Russia to showcase its military hardware on the continent to attract sales of its aircraft, tanks and heavy weapons. Russia currently is the largest arms supplier in Africa with about 37.6% of the market share, followed by the United States with 16%, France with 14% and China with 9%.

This expansion to Africa by Russia has been seen as a worrisome trend, especially as China has also established a presence in Africa. Most notably, Beijing has a naval base in Djibouti in the strategic “Horn of Africa” at the Bab-el-Mandeb Strait, which separates the Gulf of Aden from the Red Sea. China’s fast-expanding military presence is believed to allow the Asian-power to fortify substantial political and economic influence. This phenomenon is already undermining America’s presence and greatly influencing political institutions and strategy across a wide array of U.S.-allied African nations The National Interest previously reported.

Now it is Russia that could have a similar presence in Africa, but this needs to be put in perspective.

Even if Russia were to build six bases, it would still be far eclipsed by the U.S military’s reported “light footprint” on the continent, which according to a 2018 report included a vast network of at least thirty-four U.S. military bases scattered across Africa with high concentrations in the north, west and the Horn of Africa. A more recent Pentagon map—highlighted in a February 2020 article in the Intercept—showed a network of twenty-nine military bases.

While Africa probably won't face neo-colonialism or outright imperialism, it could be a bit more crowded thanks to the presence of so many military bases from outside powers.