The Russian Navy Is About to Become A Lot Deadlier 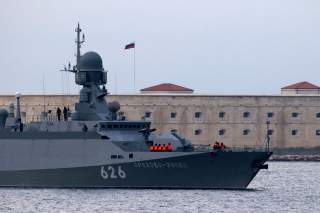 The Russian Navy is deploying marines aboard all its warships sailing to overseas stations. Their mission is to secure these ships against terrorists and saboteurs.

The anti-terrorist groups will be posted on ships sailing to distant sea zones, according to Russian newspaper Izvestia. “Marines often accompanied the ships and vessels of the Soviet Navy from the late 1960s to 1991. They strengthened the crews of the ships that were to serve in close proximity to military conflicts zones in the Middle East, Southeast Asia and Africa.”

Russia’s Naval Infantry—nicknamed the “Black Berets”—are different from their American counterparts. The U.S. Marine Corps is a 182,000-strong mini-army with its own air force and capable of independent operations. Russia’s 12,000 naval infantry are more of a traditional marine force, tasked with amphibious operations in support of the Navy, and providing detachments to ships for security and small ground operations.

“The composition and size of such anti-terror groups will depend on the type of ship,” Izvestia explains. “For example, a frigate will have 20 ‘black berets.’ They will receive weapons, machine guns, sniper rifles and grenade launchers. Marines on an ongoing basis will perform tasks to protect ships from terrorists and saboteurs and inspect suspicious ships. If necessary, the ‘black berets’ will protect ships in port.”

Marines assigned to overseas warships will receive extra training. “For anti-terrorist groups, or ‘boarding teams’ as a joke in the Navy referred to these units, the Navy developed a special training program,” Izvestia said. “First, the marines practice tactics on ships under their protection or defense, then they are trained to board vessels while conducting anti-piracy operations. In the classroom, special attention is given to fire training with small arms and grenade launchers at surface targets.”

“Marines are taught to fight in the conditions of extremely limited space in ships - in cabins, compartments, cockpits, corridors and vestibules. This type of single and group assault action requires special skills. The training of ‘black berets’ from the anti-terror group looks like this: fighters climb onto the deck of a vessel captured by pirates, after which, acting in pairs, they carry out an operation to disarm the militants. The task is to free the hostages as quickly as possible and without losses.”

In 2010, Russian marines deployed aboard the destroyer Marshal Shaposhnikov rescued the crew of the Russian tanker Moscow University after it was hijacked by eleven Somali pirates in the Gulf of Aden. Though the operation was facilitated by the tanker’s crew locking themselves in a room, thus keeping the pirates from taking hostages or operating the ship, U.S. think tank Stratfor noted that “the entire operation lasted 22 minutes — a fairly quick operation considering the size of the ship.” None of the tanker’s crew was hurt, while one pirate was killed and ten captured.

However, subsequent news reports revealed that the ten captured pirates died after the Russian rescue force released them in an inflatable boat with no navigational equipment to guide them to shore. Perhaps to avoid incidents like this, the Izvestia article noted that Russian marines are being instructed in the finer points of international law. “Special attention is paid to the International Law of the Sea. Knowledge of the laws is necessary so that in case of an emergency in foreign waters or ports, to use force correctly and to avoid excesses.”