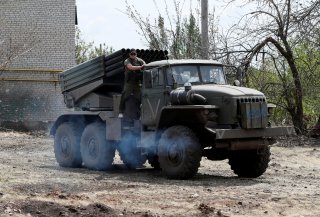 Russia launched a new wave of strikes on Thursday against infrastructure targets across Ukraine.

Russian missiles hit a military facility in Ukraine’s far-western Lviv region, announced local official Maxim Kozitsky. “They hit one of the Lviv region’s military objects. That is a repeated hit against this object. Military property was destroyed, there were no deaths,” Kozitsky wrote on Telegram. “The object is in the Zolochiv area. Three missiles, two hit their mark. One missile was shot down by our air defense forces.” Targets in Sumy and Dnipro were also hit on Thursday, according to unverified Russian media reports. Kyiv region governor Oleksiy Kuleba reported Russian kamikaze drone strikes that same day against critical infrastructure. "There was an overnight drone bombardment by invaders on the Makariv community," wrote local official Andriy Nebytov, according to Reuters. "According to preliminary information, there were no casualties." The impact of the attacks remains unclear, with Ukrainian authorities adding that the strikes were conducted by Iranian-made Shahed drones.

Hardline Russian commentators have urged the Kremlin to employ tougher measures to regain the military initiative following Ukraine’s successful advances in the northeast earlier this summer. Chechen leader Ramzan Kadyrov called on Moscow earlier this month to use low-yield nuclear weapons in Ukraine. Former Russian president Dmitry Medvedev—who has shown himself to be no stranger to hawkish rhetoric over the course of the Russia-Ukraine war—previously insisted that Moscow can use nuclear weapons to defend its newly annexed territories.

Rather than a one-off, the strikes may indicate a concerted Russian effort to target critical Ukrainian infrastructure. Former Russian officer and Donetsk separatist commander Igor Girkin greeted the attacks as a step in the right direction in an interview on Monday. “Enough already, for the past eight months they tried to resolve this conflict through compromise,” he said in an interview. “But when it became completely clear there will be no compromise, they take decisive action.”

Girkin, a nationalist Kremlin critic who accurately predicted many of the setbacks faced by Russian forces in Ukraine over the past seven months, said Russia must continue striking Ukrainian infrastructure “stubbornly and decisively” to prevent Kyiv from retrenching with the help of Western assistance.