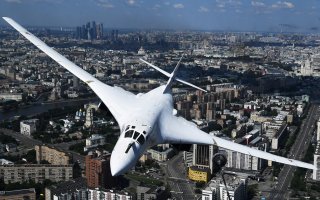 A pair of Russian Tu-160 “White Swan” strategic bombers, which are the fastest and largest bombers ever built, took part in a twelve-hour-long patrol flight over the northern seas off the coast of Russia earlier this week. The two bombers flew over the neutral waters of the Barents, Norwegian and North Seas; during which time the aircraft were escorted by MiG-31 jet fighters from the Russian naval air force along certain sections of their route, while at other times the Tu-160s were shadowed by aircraft from the British Royal Air Force (RAF) and the Royal Norwegian Air Force (RNoAF).

"Two Tu-160 strategic missile-carrying bombers conducted a scheduled flight in airspace over the neutral waters of the Barents, Norwegian and North Seas. The flight lasted 12 hours," a spokesperson for the Russian Defense Ministry told Tass on Wednesday.

Up in the Air

The dozen-hour-long mission conducted this week highlighted the endurance of the Tu-160, but it was less than half the time that a pair of the supersonic Russian bombers spent up in the air last month when two crews of the Long-Range Aviation group set a new record for distance and duration. The pilots of the Russian Aerospace Forces were up in the air for more than twenty-five hours and covered a distance of more than twenty thousand kilometers.

It isn’t immediately clear if either of the aircraft or crews that took part in this week’s twelve-hour flight were involved with last month’s record-setting flight. However, it is possible.

Russia operates a reported twenty-seven serially produced Tu-160s, along with nine test prototypes, and all of the aircraft operate out of Engels Air Force Base outside of Saratov.

The Tu-160 is outwardly similar to the American Rockwell B-1 Lancer, which spurred the Soviets to develop the “White Swan.” While both have variable-sweep wings and both are supersonic, which is about the only notable similarities. The B-1 Lancer is smaller and was developed as a bomber in the most classic sense, whereas the Tu-160 was developed as a stand-off weapons platform.

The White Swan is one deadly warbird, capable of launching missiles from its bomb bay doors and then hitting speeds of Mach 2+ to escape enemy aircraft. Yet it is the only Soviet-designed bomber not to carry any defensive weapons. That latter point may be why it was escorted during the recent twelve-hour flight by the MiG-31s as speed is really the only friend the Tu-160 would have in a fight.

The Russian military has stepped up such patrol flights to counter the increase in U.S. and NATO flights in the same neutral waters. The skies do seem to be getting rather crowded of late.