Russia's Admiral Nakhimov Battlecruiser to Get Power Boost During Retrofit 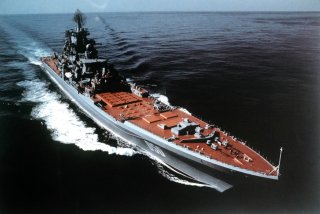 The battlecruiser Admiral Nakhimov is set to become Russia’s most powerful surface warship after an upcoming repair and refit cycle, according to Russian defense industry officials.

"The Sevmash Shipyard has begun setting up and training the delivery team for the Project 11442M [Admiral Nakhimov] ship. The crew will comprise workers, builders, adjustment and test engineers, designers, technologists and specialists of other professions. Overall, the delivery team will comprise over 1,000 people,” announced the press office of the Sevmash shipyard enterprise to Russia’s northwest.

Admiral Nakhimov was laid down under the name Kalinin in 1983 and commissioned by the Northern Fleet in 1988. The battlecruiser was permanently docked by 1999; Russia’s top military brass decided in the mid-2000s to repair and modernize the ship, but the process has reportedly been stymied by inconsistent funding and technical complications.

Sevmash’s press office told the Russian TASS state news outlet that the ship’s refit cycle is now in the stage of “large-scale internal work.” The statement added that “specialists are mounting equipment, systems and assemblies, painting and insulating premises.” Admiral Nakhimov is expected to receive over “5,000 items of equipment and more than a million of various items,” including 200 kilometers’ worth of new piping and just under 2,000 km of cables. The refit will see sweeping upgrades to Admiral Nakhimov’s weapons suite, including launchers for Kalibr-NK and P-800 Oniks anti-ship cruise missiles. Tass confirmed prior reports that Admiral Nakhimov will be among the Russian vessels compatible with the upcoming 3M22 Tsirkon winged, anti-ship hypersonic cruise missile. The Tsirkon missile is believed to be capable of reaching speeds of up to Mach 9—around 6,900 miles per hour—and an operational range of around 1,000 km.

Five Kirov-class cruisers were planned. The first two, Admiral Ushakov and Admiral Lazarev, have since been decommissioned and scheduled for scrapping. The fifth, Admiral Flota Sovetskogo Soyuza Kuznetsov, was canceled in 1990 shortly before the Soviet collapse.

There are two Kirov-class cruisers left in Russia’s Navy, both serving in the country’s Northern Fleet: Admiral Nakhimov and Petr Velikiy, the third and fourth vessels Project 1114 vessels respectively. Sevmash CEO Mikhail Budnichenko said the refitted Admiral Nakhimov is scheduled to be delivered to Russia’s Navy in 2022.