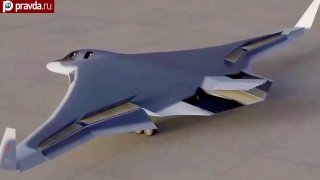 This week Russian state media reported that the Russian military has begun construction of the nation's first strategic stealth bomber, which is being produced within the Perspective Aviation Complex for Long-Range Aviation (PAK DA) program. It is also known as "Product 80" or "Courier."

A source in the Russian military-industrial complex told TASS, "The production of airframe elements will be handled by one of the United Aircraft Corporation (UAC)'s plants; development of working design documentation is complete, material shipping has commenced."

A second source told TASS that construction on the plane's cockpit is already underway, and added that the final assembly of the entire machine should be complete in 2021.

Other details on the new aircraft are thin.

TASS even reported that the Tupolev Design Bureau's press service has so far refrained from making an official comment on the construction of the first PAK DA – while reports in the western media have been limited. However, in December of last year, Deputy Minister of Defense Alexey Krivoruchko told the Krasnaya Zvezda newspaper that the draft project of the plane had been approved and that the Tupolev Design Bureau began development of the working design documentation, began the creation of parts and elements of the test PAK DA units. In February 2020, Krivoruchko announced that the first engine for the plane will begin stand trials this year.

What is known about the PAK DA is that it was designed using the so-called "flying wing scheme" – suggesting it would be similar in profile to the United States Air Force's Northrop B-2 Spirit, which has swept wings that measure 52 meters across. It is unclear at this stage the size of the wings for the Russian stealth bomber.

The Russian stealth bomber will also reportedly feature technologies and materials that reduce its radar visibility, while it will also be provided with the newest communications and jamming equipment. The PAK DA will be subsonic and will be able to carry current and future cruise missiles, precision bombs, and hypersonic weapons.

The National Interest previously reported that Moscow has requested the Tupolev Design Bureau to begin the development and production of three prototype airframes, which would begin initial flight tests between April and fall of 2025. Following testing, and depending on adequate funding the Russian military would begin testing in 2026 with production beginning in 2028. It would be the first truly Russian bomber and not simply a legacy Soviet design, or improvements upon such designs despite the fact that concept work on the PAK DA began in the late 1990s.

Even if Russia does manage to produce the PAK DA and get it in the air by the end of the decade it seems to be an equal of the B-2 Spirit, which was designed late in the Cold War to slip the Soviet Union's formidable integrated air defense network. Strategic bombers are seeing a renaissance amidst the renewed great power competition between the United States, China and Russia – and both the U.S. and China have been developing new subsonic long-range stealth bombers. This includes of course the B-21, a platform that is intended to hold any target at risk, anywhere in the world for decades to come.