Russia's Lone Aircraft Carrier Is Headed Back to the Shipyard 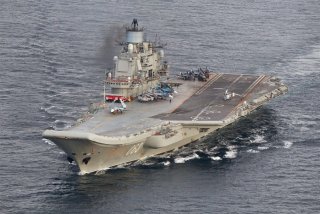 The Russian aircraft carrier Admiral Kuznetsov will be docked in April for repairs and refitting, according to a Russian state media report.

"According to the current plan the aircraft carrier will enter a dock for repairs at the 35th plant in April. The repairs will last till September," a defense industry source told TASS, a Russian state news outlet on Tuesday.

TASS said that this information has not been confirmed by the United Shipbuilding Corporation (USC), Russia’s state-owned shipbuilding conglomerate.

Russia’s sole aircraft carrier, Admiral Kuznetsov, was introduced in 1991 but did not become fully operational until the mid-1990’s. The carrier served in Russia’s Northern Fleet through the mid-to-late 2010s, deploying to the Mediterranean to support operations during Russia’s intervention in the Syrian Civil War in 2016.

Kuznetsov met disaster in 2018 when a seventy-ton crane smashed through the carrier’s hull and caused its PD-50 drydock to sink. It was estimated by Russia’s defense and shipbuilding industries that repairs to the Kuznetsov alone would cost as much as $1 billion. That figure did not include the costs of damage sustained by its drydock. Two workers died in the accident. The Russian Navy, which does not have a domestic replacement for the PD-50, has since announced plans to recover the drydock, but the status of those efforts remains unclear.

In 2019, large sections of Admiral Kuznetsov caught fire after a cable reportedly exploded during routine welding work. At least two personnel died and fourteen more suffered injuries as a result of the incident. The fire reportedly caused upwards of $1 billion worth of additional damage, adding exponentially to the already-considerable costs of repairing and refitting Kuznetsov. Russian and western experts have surmised that it may be a more prudent long-term investment, if not potentially cheaper, to scrap Kuznetsov and build a new light aircraft carrier in its place. Others have questioned whether or not Russia needs an aircraft carrier in the first place, arguing that post-Soviet Russia is a land power that does not necessarily need tools of global maritime power projection. The hulking Kuznetsov appears increasingly out of place in the midst of an ongoing Russian naval modernization plan that prioritizes a lean, agile force focused around modern corvettes and advanced nuclear submarines.

USC vice president Vladimir Korolev said in summer 2021 that Admiral Kuznetsov will re-enter service by the end of 2023, but this timetable has not been recently reaffirmed by any Russian officials.