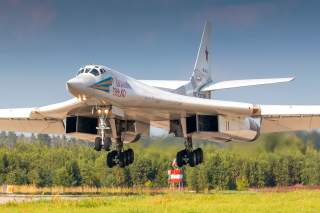 An explosion during a missile test on Russia’s White Sea on August 8 that killed seven nuclear scientists and caused radiation levels to briefly spike in the region has drawn new attention to Moscow’s development of exotic new weapons designed to deliver long-range strategic nuclear strikes.

As reports of the accident circulated, Moscow claimed that it had been testing a “liquid fuel rocket.” Rosatom, the state nuclear energy agency, then stated it was working on an “isotope power source in a liquid propulsion system.”

Convincing evidence has led to a consensus among foreign experts that missile being tested was likely a 9M730 Burevestnik (“Petrel,” a seabird)—a prototype of a nuclear-powered cruise missile. Such a missile—if it can be made to work—would be powered by a very small nuclear reactor, allowing it to fly practically unlimited distances at very high speeds.

Burevestnik’s existence is no secret. In March 1 2018, Putin revealed as one of six new weapons under development by Russia—also including hypersonic missiles and intercontinental-range nuclear drone torpedoes.

While a companion piece details the fallout from the deadly testing accident, this piece will seek to answer a simple question: why on earth is Russia seeking to develop such a peculiar and complicated weapon in the first place?

Cruise Missiles to Fly Under an Anti-Ballistic Missile Shield

Quite simply, the pursuit of unconventional weapons like the Burevestnik stems from Russian fears that America’s new anti-ballistic missile systems put Moscow’s nuclear deterrence at risk.

Intercontinental ballistic missiles fly extremely high and fast—but they are also highly visible to sensors and generally fly in a predictable trajectory. Using advanced sensors, the United States can potentially detect and shoot down a small number of ICBMs with the few dozen interceptors it has deployed. That’s far too few interceptors to stop Moscow’s hundreds of ballistic missiles, but Moscow is paranoid American defense will continue to improve.

Unlike ballistic missiles, cruise missiles skim close to surface, allowing them to hug terrain and maneuver around obstacles. These characteristics mean ground-based radars may only have a detection angle on cruise missiles when they’re only a few dozen miles away. While defenses do exist that can potentially shootdown cruise missiles, the short detection range and interception windows would mean that it wouldn’t be practical to create a huge defensive umbrellas like those provided by anti-ballistic systems.

However, most cruise missiles simply can’t pack enough fuel to fly thousands of miles on intercontinental attacks—and usually can’t sustain speeds much faster than an airliner when traveling longer distances.

A nuclear-powered cruise missile could—theoretically—have practically unlimited range, and sustain supersonic speeds, making it hard to intercept, and allowing it to circumnavigate bubbles of radar coverages and leverage terrain to minimize the chance of interception.

The Russian claim that a “liquid-fuel” booster was being tested may not in fact be inaccurate. The most likely scheme for a nuclear-powered missile involves a ramjet engine, in which the reactor would heat onrushing air at speeds exceeding twice the speed of sound. This expanding heated air would be squeezed out the engine’s rear nozzle, resulting in sustainable supersonic propulsion.

However, conventional booster would be required for the missile to move fast enough for the ramjet to work. Therefore, The Drive’s Joe Trevithick argues it’s possible scientists were testing the robustness of the missile’s reactor when exposed to the heat and physical stress caused by the rocket boosters—with explosive results.

Another issue is that the Burevestnik’s unshielded reactor core could potentially leave behind a trail of radioactive emissions and contaminants over everything it overflies. In fact, in the early 1960s, the United States’ Project Pluto developed a nuclear ramjet-powered missile that was canceled in part due to concerns over its extreme radioactive pollution—though not before its designers considered whether its extreme radioactive emissions could be weaponized! The problem remained that the trail of sickness-inducing radiation would begin over friendly territory.

Western intelligence had already been keeping tabs on Skyfall prior to Putin’s speech. Around a dozen tests have been held since 2016, first at Kapustin Yar (near Volgograd), then the Pan’kovo test site on Yuzhny island. Only two were successful. However, Pentagon snooping of the latter by WC-135 weather reconnaissance planes used to measure radiation may have led to the program’s relocation to Nyonoksa, which is distant from international airspace.

In the most successful test in November 2017, which can be seen in a video released by Putin, the Skyfall missile flew little more than twenty miles before crashing into the sea. The nuclear refueling ship Serebryanka, which was also present at the accident in August 8, was dispatched to recover the possibly irradiated debris.

These results suggest the program is far from mature. Thus, Pranay Vaddi argues in a piece on Lawfare that Burevestnik should not have any impact on renewal of the New START Treaty regulating deployed strategic nuclear weapons, as it is unlikely to enter service in the next decade.

Clearly, Russia is still far from solving the daunting challenges of developing a practical and functional nuclear-powered missile. Even if the Skyfall is eventually developed into an operational system, deploying dozens of strategic missiles each with their own miniature nuclear reactors would be extremely expensive and pose costly political, safety and security risks—as was amply demonstrated by the tragic incident on August 8.