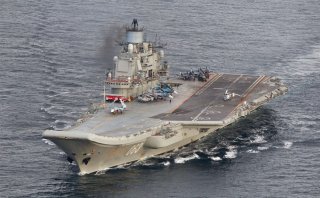 Given such facts, it shouldn’t be surprising that news broke this week that Yevgeny Zudin, general director of Shipyard No. 10 in Polyarny, was arrested under suspicion of the theft of forty-five million rubles (approximately $600,000 USD) that had been allocated to the repair of the Russian Navy’s Northern Fleet aircraft carrier Admiral Kuznetsov.

Shipyard No. 10 (10 Order of the Red Banner of Labor Shipyard) is part of Zvezdockha yard in Severodvinsk, a subsidiary of United Shipbuilding Corporation.

A criminal case was opened last December against the general director, alleging that he overbilled the shipyard for the cleaning of the Admiral Kuznetsov’s fuel tanks. The shipyard had been subcontracted by the Zvezdochka ship repair center for several stages of cleaning work in October 2018. The work was reportedly completed in July 2019 and the shipyard had billed the Russian military for twenty-three thousand man-hours worth of work instead of the thirteen thousand man-hours of work that was actually conducted.

An arrest warrant was issued for Zudin on March 19. At least five additional charges are likely to be pressed following his arrest. According to a report from Tass, a law enforcement source said that about ten searches were carried out at the shipyard, as well as at the residences of some of the company’s executives.

Zudin faces up to ten years in prison if found guilty.

Admiral of the Fleet of the Soviet Union Kuznetsov is currently the largest warship and the only aircraft carrier of the Russian Navy. The aircraft carrier is part of the Northern Fleet and can carry twenty-six aircraft and twenty-four helicopters on the flight deck and in the under-deck hangar. The ship has had a tumultuous service record.

Built during the final decade of the Cold War in the Soviet Union, the aircraft carrier was only launched in 1985 and commissioned in 1991, but due to the dissolution of the Soviet Union only commissioned into the Russian Navy in 1995. During construction Admiral Kuznetsov was officially designated as aircraft-carrying cruiser. That allowed it to transit the Turkish-controlled Bosporus and Dardanelles Straits under the Monteux Convention, which unofficially prohibits aircraft carriers from conducting such transits.

The warship has been undergoing a refit since 2018, during which she was involved in a series of accidents. This included damage to the flight deck when a floating crane fell over in October 2018, while in December 2019, a fire started during welding work in one of the engine rooms—killing two and injuring fourteen others.

If there are no further delays, Admiral Kuznetsov is expected to be ready for sea trial in the Barents Sea next year.