Russia's Su-33 Is Fast and Capable (But Just Too Big) 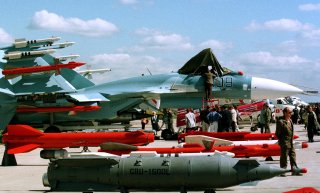 The Su-33 is nearly synonymous with the Admiral Kuznetzov. As a carrier-capable fighter, it is often seen and photographed taking off from the sloped ski-jump flight deck, although it typically lands less often. Painted a light blue, its naval camouflage is, ironically, hard to miss.

Derived from the Su-27, (itself an interesting plane) the Su-33 airframe is outwardly fairly similar, although crucial parts have been optimized for aircraft carrier landings, which typically put greater stress on the undercarriage, and for carrier take-offs, which typically offer airplanes much less real estate to work with.

Its landing gear is accordingly much more robust than those of other members of the Flanker family, and its front landing strut is equipped with two wheels to better absorb landing impact, whereas it it’s parent, the Su-27 sports just one.

In order to accommodate the relatively short runway distances associated with aircraft carriers, the Su-33 has roughly an 8% greater wing area than the Su-27 during normal flight. The Su-33 also has two canards just below and rear of the cockpit. These two control surfaces provide additional lift and maneuverability, especially at low speeds.

Another nod to the cramped conditions on aircraft carriers, the Su-33’s wings fold upwards to near the center, as do its stabilators, facilitating compacted parking positions on the tarmac.

Good but not Great

The similar MiG-29K is essentially a rival to the Su-33, although the Su-33 is the more capable aircraft. It can fly farther, carry more and heavier ordinance, and has a longer loiter time than the MiG.

It’s one drawback is it’s size. The Su-33 is markedly bigger than the MiG. Russia’s only aircraft carrier, the troubled Admiral Kuznetsov, is therefore unable to carry as many Sukhois as MiG.

It is believed that there are around 35 Su-33s in the Russian naval service, and while a modernization process is underway to modernize the fleet and address issues that were left unresolved due to funding constraints: namely higher performance engines, and upgraded radar and targeting systems to allow targeting from greater distances.

The J-15 is a Chinese copy of the Su-33. It’s apparently not a very good one either. For a carrier-based airplane, it’s heavy — really heavy. At nearly 18 tons, it dwarfs the U.S. Navy’s F-18s by four tons. Not a good strategy for difficult carrier top landings.

On top of that, the J-15 is unreliable. Various mechanical failures and accidents have been behind at least four fatalities associated with the aircraft. The J-15’s performance has repeatedly been so bad that it helped spur the development of China’s indigenously produced stealth fighters.

Chinese or Russia, these may be the last days of the Su-33.