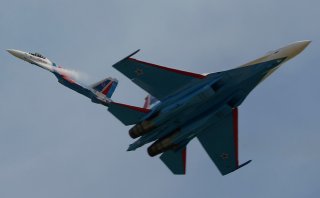 Russian aircraft are rehearsing for what is shaping up as one of the most unique Victory Day Parade flypast performances in recent years.

A slew of Russian planes and helicopters recently practiced their routines in anticipation of the upcoming May 9 Victory Day parade, commemorating the Soviet Union’s victory over Nazi Germany in World War II.

The flypast rehearsal included as many as seventy-six aircraft, comporting with the seventy-six years that elapsed since the end of World War II. Fifty-three planes and twenty-three helicopters are set to take part in the event. The latter includes three Soviet-era Mi-26 transport helicopters, which will open the parade. These will be followed by Mi-8, Mi-35, and Ka-52 helicopters, as well as the Berkuts Mi-28N aerobatics demonstrator team. The Berkuts, which had previously used Mi-24 helicopters before switching to Mi-28Ns, performed at previous Victory Day parades going back to the 1990s.

The flypast introduction is a rather standard fare for these types of events, but what happens next is not: for the first time, a Tu-160 Blackjack strategic bomber will fly over the Red Square while being escorted by a wing of Su-35S fighter jets. “We are planning a flight in a traditional formation over Red Square but this year a group of a Tu-160 aircraft escorted by four Su-35 fighters of the Russian Knights aerobatic group has been added,” Alexander Ivashkin, the Aerial Weapons and Tactical Training Chief of the Aircraft Demonstration Center, told Russian media. The Tu-160 is a somewhat curious choice for a flypast showpiece at one of Moscow’s largest annual military exhibitions; though it is among Russia’s latest dedicated bombers, the Blackjack of the 1980s era can hardly be considered new. There are reportedly several upgraded Tu-160 variants in the works, including the upcoming Tu-160M that embarked on its maiden flight in 2020; it is apparently not being displayed at this year’s parade, likely because it is not yet ready to enter service. Then there is the deeply modernized Tu-160M2 revision, which is expected to be delivered to Russia’s Air Force in 2023.

So why, then, is a forty-year-old bomber being given such a prominent place in this year’s flypast roster? The answer will be revealed in several days, but one working assumption is that the Kremlin seeks to show off a new airborne weapon. This could be the hypersonic, nuclear-capable Kh-47M2 Kinzhal ballistic missile, unveiled with great aplomb during Russian President Vladimir Putin’s 2018 annual state-of-the-nation address. The Kinzhal missile made its Victory Day parade debut that same year aboard a MiG-31 interceptor. It was previously confirmed that Russia’s military is assessing the possibility and usefulness of fitting the Kinzhal onto the Tu-160; it is difficult to think of a better way of making it official than by flaunting a Kinzhal-equipped Blackjack at this year’s parade. The Kinzhal appears to have a shorter range than the Tu-160’s Kh-55SM cruise missiles, but is exponentially faster at a speed of up to Mach 10 and would grant the Tu-160 platform the means to penetrate U.S. missile defense networks in ways that it previously could not.

The Su-57 fifth-generation air superiority fighter jet, along with such Russian military aviation staples as the Su-35S and Su-34, will be making an appearance toward the end of the flypast event. In addition to the flypast section, the parade will involve a mechanized column of over 190 vehicles that includes thirty-five types of “new and modernized military hardware.” A total of over twelve thousand servicemen, spread across thirty-seven units, are expected to march across the Red Square.