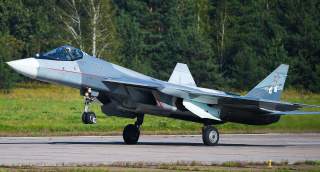 With the first serially produced Su-57 scheduled for delivery to the Russian Air Force by the end of 2019, aircraft manufacturer Sukhoi unveiled the export variant of Russia’s flagship fifth-generation fighter at the MAKS 2019 air show earlier this summer. In an illustration of the Kremlin’s increasingly proactive advertising approach, Russian President Vladimir Putin made news waves for personally pitching the Su-57E to his Turkish counterpart Recep Erdoğan.

But this recent focus on high-profile presidential outings belies years of persistent behind-the-scenes work by Russia’s state arms export agency-- Rosoboronexport-- to line up a surprisingly wide array of potential Su-57 buyers and investors. Here is a current shortlist of all prospective Su-57 importers.

Myanmar: The most recent addition to this list, Myanmar’s ambassador to Russia Ko Ko Shein Russia notified Moscow of his government’s interest in importing the Su-57 earlier this month. Myanmar previously signed a contract with Rosoboronexport to replace its aging Soviet MiG-29’s with a fleet of Su-30SM Flankers. Even if it uses objectively more expensive components, the Su-57E could end up costing Myanmar barely more than the Su-30SM; as previously described by The National Interest, the Russian government is willing to “short-sell” the Su-57 in the short term if it plants the seeds of a profitable export platform down the line. Though unsuited for helping Myanmar’s government with their ongoing counterinsurgency efforts, the Su-57E would go far in shoring up Myanmar’s drastic deficiency in air-to-air power.

Algeria: A major military power in North Africa, Algeria is a prolific importer of Soviet and Russian hardware; notably, Algeria’s Territorial Defense Forces are widely speculated to have procured four S-400 regiments in 2015. Deputy Russian defense minister Yuri Borisov identified Algeria, which operates an all-Soviet/Russian fighter force, as a potential Su-57 import candidate in 2018. The Algerian army’s heavy interest in Russia’s analogous Su-35 air superiority fighter suggests that they would be open to the Su-57E, if offered at a similar price.

Turkey: In a turn of events that would have been unthinkable as recently as the summer of 2019, the Kremlin has pounced on Turkey’s recent ejection from the F-35 program with a concerted effort to sign a fighter procurement contract with Ankara. However, that fighter will not be the Su-57E-- at least not yet. Recent reporting suggests that Russia and Turkey are on the verge of signing a Su-35 procurement and joint-production contract. Still, the Kremlin has both time and patience in abundance; if Russo-Turkish military ties continue to deepen, the Su-57E may become more attractive to Ankara over the coming years.

China: For reasons that I previously outlined, the People’s Liberation Army is unlikely to buy the Su-57 to serve their air force (PLAAF). However, that hasn’t stopped Rosoboronexport from trying to build on what they see as the success of China’s previous Su-35 procurement orders. Beijing, for their part, may be at least interested in purchasing a few Su-57 models for training and  “technical study” purposes.

India: In the aftermath of India’s dramatic 2018 withdrawal from the FGFA program to jointly develop a Su-57 variant, Russia’s defense industry has made numerous unsuccessful overtures to reincorporate New Delhi as a Su-57 importer or investor. With Putin’s May 2019 announcement that the Su-57 is entering production in much larger quantities than previously expected, India’s air force has begun to cautiously signal a renewed interest in the Su-57E. Recent comments from IAF Chief of Staff Birender Singh Dhanoa indicate a shift from categorical refusal to a wait-and-see approach, though it’s too early to tell if India’s initial qualms with the FGFA program have been addressed with the Su-57E.