Russia's Torpedoes Range from Old and Obsolete to Nuclear Armed 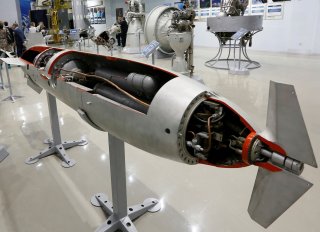 Russia boasts one of the largest, most diverse submarine fleets in the world. Both diesel-electric and nuclear propulsion make their submarines deadly. But it’s not just the submarines themselves that are so dangerous—it is their torpedoes as well that pack a punch. Here is a selection of some of the most dangerous in Moscow's arsenal.

The Futlyar is one of Russia’s newest torpedo designs. This advanced torpedo is said to be an advanced variant of Russia’s Fyzik class of torpedoes, and has likely been purpose-built for Russia’s newer Yasen- and Borei-class submarines.

According to the Russian TASS news agency, the Futlyar features several advanced characteristics. “The Futlyar will also be supplied with an improved homing system with an extended underwater target lock-on range. It will retain the baseline model’s range, speed and maximum launch depth—50 km, over 50 knots and 400 m respectively.” The heat-seeking torpedo will be controllable from inside the submarine that launches it as well.

Though the Shkval does not offer any advantages in terms of explosive potential over older conventional submarines, it may be the fastest torpedo currently in existence, not to mention the world’s first functional supercavitating torpedo.

Supercavitating torpedoes attempt to ride inside a bubble of gas or air in order to reduce hydrodynamic drag and move faster through the water. One of the more difficult aspects of supercavitation technology however is steering. The Shkval features a pivoting nozzle on the torpedo nose that could direct compressed gas into multiple directions, seemingly solving the problem of steering.

One of Russia’s most-hyped torpedoes is the Poseidon torpedo which is both nuclear-powered and nuclear-armed. Thanks to its unique propulsion system, the torpedo’s range is thought to be virtually unlimited. It’s also the largest torpedo ever built—this video, released by the Russian Ministry of Defense shows a Poseidon being assembled and gives a good idea of just how big the large torpedo actually is.

Thanks to the torpedo’s virtually limitless range, the torpedo can cruise towards a target area. This is also possible at a reduced speed that, while slower, is quieter and makes the torpedo hard to detect. Experts have suggested that the Poseidon’s potential targets could be coastal cities—or U.S. Navy battle groups.

The Russian Navy has reportedly been suffering from a lack of modern torpedo designs in recent years. A Russian Navy source commented that Russian torpedo manufacturers “make obsolete torpedoes that were developed back in the 1980s and we don’t even have enough of them for testing when building or refitting ships and submarines. The torpedoes that we have in storage are out of their service lives and can’t be used,” indicating the depth of the problem. However, these problems may finally be getting resolved.