Meet Russia's Borei-Class Submarines: It Could Wipe Out Entire Nations in Minutes 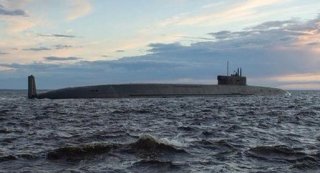 The Borei-class of submarines is thought to be extremely quiet—and is the launch platform for Russia’s newest ballistic nuclear missile.

The Borei-class is a nuclear-powered ballistic missile submarine that is projected to replace the Typhoon- and Delta-classes. The Borei-class is significantly smaller than the two classes it is replacing, in both physical size and crew number, though there is some variation within the Borei-class itself.

The naval expert H. I. Sutton explained that the first three Borei hulls were “constructed from unfinished hull sections from AKULA Class attack submarines and OSCAR Class cruise missile submarines. The Borei-A is however completely new-build.”

Despite the new build, “overall dimensions are not significantly altered and internal layout is probably very similar, although the new construction may have allowed some internal redesigns.”

The Borei-A-class has either one or two towed sonar arrays stored in tubes inside the vertical rudders that retract inwards. There is also a noticeable bulge running alongside the hull for much of its length that is likely a “flank” sonar array, which would allow the Borei-class to “see” into the ocean with sonar in both the port and starboard directions.

Additionally, the submarine uses a new hydrodynamic design. The rudders, hydroplanes, and sail were all redesigned to increase maneuverability and to reduce noise. The sections of the sub that house the ballistic missile silos appear to be quite smooth, and would presumably be quieter than previous designs like the Typhoon, which had a prominent missile compartment. This probably compromised the submarine’s acoustic signature by making it louder.

Though quieter, the reason the Borei-class is believed to be so deadly is its missiles.

Sutton explained the importance of the Borei-class to the Russian Navy, saying that the class would form the backbone of Russia’s nuclear deterrence at sea—thanks to the Bulava ballistic missile.

In addition to six standard 533 millimeter torpedo tubes, the Borei-class is designed launch the RSM-56 Bulava missile, the submarine portion of Russia’s nuclear defense triad, and Russia’s most expensive weapons program. The Borei-A-class is probably equipped with 16 missile tubes, though it may have as many as 20.

It is likely that each missile carries 10 warheads, and has a maximum range of about 8,300 kilometers, or about 5,200 miles. The missile is highly maneuverable, and can be re-targeted during flight. Despite the impressive resume, the Bulava experienced some significant teething issues, which pushed back its naval entry.

The delayed debut of the Bulava missile program also pushed back the debut of the Borei-class. Extensive issues were uncovered, including lax quality-control standards, poor component workmanship, and insufficient testing. Once the missile’s reliability was addressed, however, they were immediately deployed on the three Borei-class submarines that Russia currently operates.

Like many military projects in Russia, its final realization is highly dependent on the price of oil. If this month’s odd oil prices are any indication of what is to come, don’t expect to see many more Borei-class submarines—of any type—anytime soon.