The Saab 37 Viggen Fighter – A Plane With a Reverse Gear 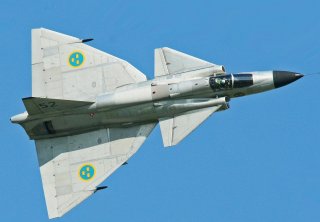 Of all the planes produced during the Cold War, one of the most interesting to look at remains the Swedish Air Force’s Saab 37 Viggen (“Bolt”). The plane is easily recognizable for its enormous canards and its delta wing configuration; although both innovations preceded it and were used later on other jets, notably China’s Chengdu J-20 “Mighty Dragon”, it was one of the first modern fighter jets to use either.

The Saab 37 could fly at speeds of above Mach 2 at high altitudes; unusually, it could also operate from runways of 500 meters. By comparison, the Grumman F-14 Tomcat, an American jet from the same period, required more than 750 meters to land.

The Saab 37’s efficiency in this regard is a function of its unusual engine design. To keep its landing distance minimal, Saab integrated a thrust-reverser into the Volvo engine, making the Saab the first and only single-engine fighter jet with such a measure included. Flight instructor Thomas Kolb explains the engine on Quora:

“With the Viggen, three triangular metal “petals” in the engine exhaust could be folded down by the pilot pulling out a T-shaped lever on the left side of the dashboard in the cockpit. This would then direct the entire air stream from the engine forward through slits around the back of the fuselage.”

A jet is normally powered by the propulsion of air backward, pushing the plane forward. By covering the exhaust and redirecting the air pressure through forward-facing slits, the plane would be pushed backward, slowing it down on a runway.

Kolb continues: “If the reversor was activated in flight, the system would become armed so that the reversor plates would automatically close as soon as the main and the nose undercarriages became compressed when touching the ground. By pushing the throttle forward and adding power, the pilot could then get the aircraft to a surprisingly short stop.” According to Kolb, this innovation came about because of Swedish defense policy, which dictated that the jets should be able to land within short stretches of flat space, such as on sections of road, in the case of emergencies.

Fortunately, this innovation was never necessary in a time of war. A positive side effect, noted Kolb, was that the planes were able to perform a creative stunt at air shows: land on a short runway, use the engine in alternating directions to turn the plane fully around with a Y-turn, and take off again in the opposite direction. One wonders if parallel parking will be next.