Sad: The Navy's Ford Class Supercarrier May Be Delayed Until 2024 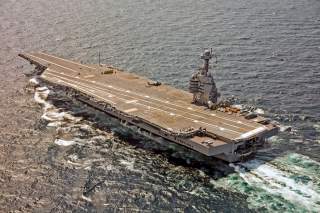 Key point: The Ford class of super aircraft carriers was supposed to replace the old Nimitz. But it looks like a ton of errors will put off the military's latest megaproject.

The U.S. Navy’s new aircraft carrier USS Gerald R. Ford might not be able to deploy until 2024. That’s years later than the Navy originally expected. The delay could further inhibit the ability of the Navy’s Atlantic Fleet to deploy carriers.

This first appeared in October 2019 and is being reposted due to reader interest.

The nuclear-powered Ford, which cost no less than $13 billion to build, has been undergoing trials off the U.S. east coast since commissioning in 2017.

The Ford class, in theory, represents a major improvement over the previous Nimitz-class supercarriers. The Navy so has ordered four Fords. Lead vessel Ford was supposed to deploy for the first time in 2022.

Sea trials have underlined a host of problems with the thousand-feet-long Ford that have compelled the Navy repeatedly to delay the ship’s first operational deployment. The Navy’s decision to conduct explosive shock trials of the new flattop before deploying her also has contributed to the delays.

The most high-profile failures have involved the Electromagnetic Launch System catapult, a new aircraft arresting system called the Advanced Arresting Gear, the weapons elevators that haul bombs and missiles from the munitions magazines to the deck and the ship’s primary sensor, the Dual Band Radar.

Ford has four weapons elevators, each requiring precision installation of components weighing tens of tons. As of October 2019, just three of the elevators were working. “We certified now and turned over to the crew three elevators,” James Geurts, the Navy's top acquisitions official, told lawmakers on Oct. 22, 2019. “The fourth one is very close.”

“We’re about 75 percent done with the entire project,” Geurts explained. “We’re talking about in some cases [lining up] 70-ton doors and hatches. It’s not a technology issue. It’s a construction completion issue in terms of getting all the doors and hatches where they need to be.”

Naval Sea Systems Command head Vice Adm. Tom Moore said he was optimistic the Navy and shipbuilders would be able to make up for recent delays and get Ford out on her maiden deployment earlier than 2024. “We’re going to pull back as far to the left as we can, but I think we’re going to beat that,” Moore said at the same Oct. 22, 2019 hearing with lawmakers.

But Ford’s problems are just one factor in the Navy’s worsening struggle to sail carriers from the East Coast. USS Harry S. Truman in August 2019 suffered electrical problems that delayed her own planned deployment. Problems overhauling USS Dwight D. Eisenhower in late 2018 “left the carrier unable to relieve USS Abraham Lincoln in the Middle East and forced Truman into a double-pump deployment,” Sam LaGrone reported for USNI News.

The Navy’s controversial proposal in early 2019 prematurely to decommission one of its East Coast flattops would have compounded the shortage.

The sailing branch proposed to decommission the 21-year-old Truman in the early 2020s, just halfway through her planned service life, in order to free up billions of dollars for newer ships including Ford-class carriers.

But decommissioning Truman would have dropped the carrier fleet to a low of nine vessels in the 2030s, despite a legal requirement for the Navy to operate at least 11 carriers at all times. If the fleet lost Truman and couldn’t buy or deploy Fords fast enough owing to technical problems with the new ships, the carrier force could’ve shrunk even further.

Lawmakers objected to the Navy’s plan, forcing fleet leaders to backtrack. Truman is set to continue in service. But the delay in deploying Ford amounts to a cutback all its own. An aircraft carrier that can’t deploy doesn’t contribute anything to America’s national defense.

David Axe serves as Defense Editor of the National Interest. He is the author of the graphic novels  War Fix, War Is Boring and Machete Squad. This first appeared in October 2019 and is being reposted due to reader interest.