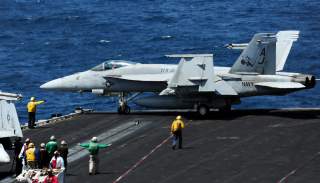 The U.S. Navy has released the 2020 edition of its 30-year shipbuilding plan. The plan represents a significant shift in strategy compared to past editions.

Where just a year ago, the Navy anticipated quick but uneven growth to an eventual, sustainable total of around 340 ships, now the fleet expects steadily to grow, gradually adding ships until today's 287-ship fleet expands to 355 vessels in 2034 ... and stays at that level through 2049.

The expansion plan likely will be extraordinarily expensive and it's not clear Congress will fund it. The Navy anticipates it will need around $25 billion a year every year through 2049 just for new ships. That's roughly double what the service historically has spent.

Just one ship type makes the expansion even remotely feasible. The Arleigh Burke class of destroyers is the "principal driver" of the 355-ship fleet, the shipbuilding plan states. The Navy wants to buy more destroyers and keep each ship in the class in service for 42 years, more than a decade longer than the fleet expected when it commissioned the lead vessel in the class in 1991.

Other ship types don't fare as well. Owing to a gap in production during the 1990s, under the plan the attack submarine force declines from 56 in 2019 to a low of 42 in 2028, this despite the Navy's plan to extend the lives of reactor cores in several older Los Angeles-class SSNs, allowing them to serve a few years longer than the fleet originally planned.

"Numerically, SSNs remain the furthest from the inventory objective and options are being explored regarding expanding production," the plan states.

The 2020 shipbuilding plan also assumes that Congress will allow the Navy to decommission the aircraft carrier USS Harry S. Truman in 2024, decades earlier than planned. Congressional leaders already have called the Truman proposal a non-starter.

Truman's early retirement would drop the carrier fleet from 11 in 2020 to a low of nine in 2027. By the 2030s, the flattop fleet would hover between nine and 10 ships, despite a legal requirement for the Navy to operate 12 carriers.

The cruisers are indispensable despite their problems, as only they have the space and communications systems that are necessary to support the air-defense commander for a carrier battle group. Until the Navy buys a new large surface combatant, it needs at least as many cruisers as it has carriers.

But with 22 cruisers in the fleet in 2019, the Navy can afford to decommission many of them. To that end, the 2020 shipbuilding plan proposes to cancel upgrades for the six oldest Ticonderogas and begin retiring them in 2020. This plan, too, could be subject to intensive Congressional scrutiny.

Mine countermeasure ships are another problem. The Navy operates 11 Avenger-class minehunters. They are the only dedicated mine-warfare ships in the fleet. Four each of the Avengers are based in Japan and Bahrain, leaving three in San Diego for training.

The 2020 shipbuilding plan proposes to dismantle the three U.S.-based minehunters in order to free up spare parts for the other eight ships.

Meanwhile, the Navy would quickly shift to "a broad-spectrum, cross-domain, expeditionary approach" to minesweeping that includes undersea robots, Littoral Combat Ships carrying minehunting gear and packs of minesweeping gear that any "vessel of opportunity" can embark.

"This approach is the central theme of the classified Mine Warfare Strategy that will be provided to Congress in 2019," the plan states.

Notably, the 2020 shipbuilding plan doesn't count the 10 robotic corvettes the fleet wants to procure starting in 2020. The fleet would acquire the unmanned vessels, but wouldn't include them in its official ship-count.

"The physical challenges of extended operations at sea across the spectrum of competition and conflict, the concepts of operations for these platforms and the policy challenges associated with employing deadly force from autonomous vehicles must be well understood prior to replacing accountable battle force ships," the plan states.

"Accordingly, the Navy will continue to move quickly to assess the resultant naval power delivered by these systems, moving forward based on demonstrated, evidence-based capability."