This U.S. Navy Aircraft Carrier Won't Be Headed to the Scrapper 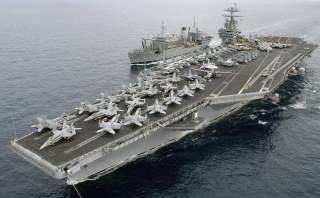 Lawmakers are lining up to reject the U.S. Navy's proposal to prematurely decommission, as a cost-saving measure, the nuclear-powered aircraft carrier USS Harry S. Truman.

The Navy likely anticipated the widespread opposition, observers pointed out, underscoring that the sailing branch apparently floated Truman's early retirement as a ploy to secure additional funding in the 2020 budget.

The ploy apparently is working.

There is "zero" chance the House Armed Services Committee will approve the decommissioning, said Rep. Joe Courtney, a Connecticut Democrat and the chair of the HASC seapower subcommittee.

"The Truman is only about 25 years old, which in [terms of] an aircraft carrier is actually pretty young," Courtney said, according to Business Insider.

"I think in terms of it getting any endorsement in the seapower mark this year I think is zero," Courtney added, according to Defense News.

The Washington Post columnist David Ignatius on Feb. 26, 2019 first reported the proposed carrier cut. Breaking Defense a day later confirmed that the 21-year-old Truman is the ship in question.

The Navy previously had planned to keep Truman in service at least another 25 years. In an abrupt reversal, the Navy in its 2020 budget proposal reportedly will propose to cancel Truman's 2024 mid-life overhaul, effectively forcing the service to decommission the vessel once its nuclear reactor cores wear out some time in the 2020s.

Retiring Truman halfway through her planned service life would shrink the carrier fleet from 11 to 10 in the mid-2020s. The move could save the Navy $30 billion over a 25-year period, Breaking Defense estimated.

"Ultimately, the Navy got its two-carrier deal, but at a heavy price," Seligman wrote. "It agreed to defer the midlife refueling of an older, Nimitz-class nuclear-powered aircraft carrier that participated in the U.S. wars in Afghanistan, Iraq and Syria.

The internal struggle between Mattis and the Navy raged as the Trump administration struggled to build up the fleet to 350 ships. The expansion could cost as much as $23 billion a year, according to the Congressional Research Service. But in recent years the Navy’s annual shipbuilding budget has averaged around $15 billion.

In early 2019 the Navy has signalled a slowdown in shipbuilding that could undermine the 350-ship fleet.

"In light of the new National Defense Strategy and changes in the security environment since that was put out, we’re doing a new force-structure assessment," Adm. John Richardson, the chief of naval operations, said in a February 2019 conversation with reporters. "We’ll see where that goes."

But legislators have made it clear they won't let the Navy cut carriers.

"These reports, which I just heard yesterday, are really puzzling," Virginia senator Tim Kaine, a Democrat, said during a Feb. 28, 2019 conference call with reporters. "It’s just a waste of the investment if you do not refuel a carrier that has another 25 years of life."

"We have made a significant investment in these ships, and I am perplexed why anyone would consider taking the cornerstone of the United States naval force and allowing it to atrophy," said Rep. Rob Wittman, a Virginia Republican.

The syndrome takes its name from a federal budget showdown in 1969. George Hartzog, then the director of the National Park Service, closed popular national parks such as the Washington Monument in reaction to proposed spending cuts.

The public complained and Congress restored the funding. The same dynamic apparently is playing out 50 years later, with an aircraft carrier playing the part of the Washington Monument.