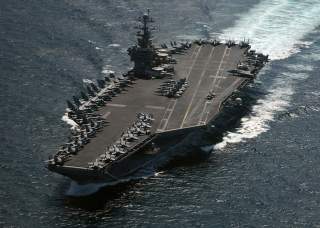 The U.S. Navy reportedly is considering cutting an aircraft carrier, dropping the number of flattops to 10 in the short term and potentially just eight in the longer term, despite a legal requirement for the service to operate at least 11 carriers.

The Navy's own force-structure assessment calls for 12 carriers.

The Navy in its 2020 budget proposal will propose to cancel Truman's 2024 mid-life overhaul, effectively forcing the service to decommission the vessel once its nuclear reactor cores wear out some time in the 2020s.

Retiring Truman halfway through her planned service life would shrink the carrier fleet from 11 to 10 in the mid-2020s and all but prevent the Navy from ever getting to 12 flattops. The move could save the Navy $30 billion over a 25-year period, Breaking Defense estimated.

"We would end up with a smaller, but younger fleet," former deputy defense secretary Bob Work told Breaking Defense.

Carriers are expensive. They cost billions of dollars to build and additional billions of dollars annually to man, equip and operate. When the Cold War ended, the Navy steadily cut the flattop fleet to a modern low of 10 vessels in late December 2017. This despite a 2006 law requiring the Navy to maintain 12 carriers.

A 2007 amendment to that policy allowed the fleet to drop down to 11 carriers. The dip to 10 flattops lasted just eight months before a new, 11th carrier commissioned into service in the summer of 2017.

The Trump administration largely has adhered to Mabus's plan, although in recent months it has signalled a slowdown in shipbuilding that could slow the rate of expansion. The sailing branch also is considering replacing some planned new ships with cheaper robotic vessels.

Pace of construction notwithstanding, there is strong bipartisan support for a bigger U.S. fleet. Prior to Mabus's 2016 assessment, the Obama administration had aimed to expand the fleet to 308 front-line vessels.

But the CRS published its report before the Navy proposed to cancel Truman's overhaul. If Congress consents, the carrier fleet could shrink to just eight in 2048.

New construction could restore the lost force structure. But building and sustaining an aircraft carrier requires decades of planning and work, all requiring steady funding. Decommissioning Truman in the 2020s could push any prospect for a 12-flattop fleet out past the 2060s.

In other words, never. "I can’t imagine this will go over well at all," an unnamed Hill staffer told Breaking Defense.

When the Obama administration in 2014 proposed prematurely to retire Truman's sister ship USS George Washington, Congress overrode the decision and added billions of dollars to the Navy's budget to keep Washington in service.

It's unlikely Congress will approve the Navy's proposal to cancel Truman's overhaul, Breaking Defense concluded. Navy leaders know that, and might be floating Truman's early retirement in a bid to squeeze more money out of lawmakers.

"The mid-life overhaul has been used as a bargaining chip for a larger budget in the past," Jerry Hendrix, a retired Navy captain and naval analyst, told Breaking Defense.