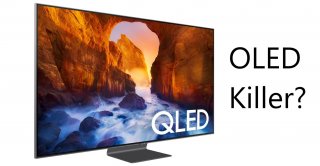 Since 2017, Samsung’s QLED lineup has been a compelling alternative to the OLED panels that otherwise dominate the high-end TV market. But the South Korean tech giant’s 2019 Q90R flagship is the strongest OLED challenger yet, achieving a level of performance previously thought impossible for LCD LED TV’s.

As soon as you take the Q90R out of the box, you’ll notice a significant and welcome design change from Samsung’s flagship models of the prior years. Gone are the two legs at either end of the TV, replaced by a minimalistic and quite solid-feeling metal pedestal protruding from the center. Those who prefer a wall-mounted solution should look into Samsung’s own No Gap mounting kit-- just make sure to plan ahead when it comes to concealing the included One Connect Box, which can get quite tricky in certain setups.

Then there’s the performance. You can find our explainer of what QLED--or Quantum Light-Emitting Diode--technology is, and what it can become, here. In short, QLED displays work by placing a metallic quantum dot layer behind a backlit LED panel, producing a brighter and much more vivid picture than anything possible on a regular LCD TV. QLED panels can vary in implementation just like their OLED counterparts, but the quality of the one found on the Q90R is nothing short of spectacular-- as it should be, given its premium price tag of $3,499 MSRP (Best Buy is currently offering the 65” model for a much more palatable $2,199.99).

The Q90R showcases Samsung’s efforts to fix a major weakness of the 2018 Q9FN, and a general shortcoming of most QLED panels: limited viewing angles. Employing an extra screen layer for added panel uniformity, Samsung’s Ultra Viewing Angle technology makes the Q90R a stronger choice than its predecessors for less-than-ideal seating arrangements. The Q90R’s impressive contrast performance means that it’s capable of showing darker blacks than virtually any other LCD television on the market, almost matching the perfect blacks of OLED panels.

Color reproduction is where QLED panels traditionally shine in comparison to their OLED counterparts--the Q90R is no different, showing some of the most accurate and vibrant colors in its performance class. Meanwhile, the Q90R’s staggering 1,300 nits of brightness makes it one of the best platforms for consuming HDR content. Samsung’s Quantum Processor 4K uses upscaling techniques to greatly improve the image quality of 720p and 1080p content.

Gamers will be pleased to know that the Q90R includes a ‘game mode’ function to significantly cut down on input lag, as well as built-in Freesync technology to eliminate stutter and screen tearing.

So, is the Q90R worth buying? Aside from some of the best-in-class OLED TV’s, the Q90R’s most interesting competitor comes from Samsung itself: if you opt for the 55” model, you can pick up Samsung’s 8K Q900 TV for a comparable $2,499. The Q900’s obvious advantage is 8K resolution and all the benefits that entail, but keep in mind that the Q90R still has richer blacks, better color reproduction, and slightly more convincing HDR performance.

QLED panels have long been around as an alternative to OLED TVs, giving higher brightness and better color accuracy while demanding sacrifices in viewing angles and contrast levels. The Q90R is arguably the first QLED TV to truly overcome this trade-off, offering all the familiar strengths of QLED technology but without its usual weaknesses.