The Saudi Oil Attack Mystery: Who Really Took Out 5% of the World's Oil? 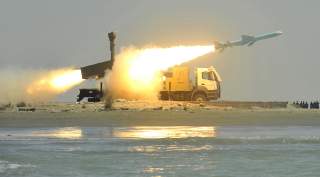 Though the facilities at Khurais and Abqaiq were theoretically defended by at least three different types of air defense systems, including U.S. Patriot PAC-2 air-defense missiles, they failed to detect the attack until too late.

The facility’s guards only had time to unleash last minute bursts automatic weapons fire before the explosive-laden drones slammed into facilities in Abqaiq, and three of the seven cruise missiles struck Khurais.

Houthi rebels in Yemen swiftly claimed responsibility for the attack, stating that they had employed a home-cooked cruise missile called the Quds-1.

Certainly, the Houthis had the motive to carry the attack out, as for the last four years they had been locked in a brutal war with Saudi forces. Over that time, they had lobbed dozens of high-flying ballistic missiles at targets in southern Saudi Arabia.

But the range of the strike seemingly exceeded established Houthi capabilities. And furthermore, the photographic “proof” offered by the Houthi that they had scouted out the sites with a drone for targeting purposes was demonstrably forged.

Several days later, on September 18, the Saudis showed recovered wreckage from the drones and missiles on television—and blamed Tehran for the attack.

The Saudis also argued that the impact points of the weapons implied they were approaching from the northwest from Iran, not the south from Yemen where Saudi defensive radars were oriented.

However, one shouldn’t infer too much from impact points, as both drones and cruise missiles can be programmed to maneuver and adopt complex trajectories to optimize their approach vector. That means they wouldn’t necessarily approach their target in a straight line from their point of departure.

But Fabian Hinz writes at Arms Control Wonk that the Saudis called it wrong:

“…both the remnants of fuselages as well as the debris of the Czech-designed TJ100 engines show that the type of missile used was identical to the missile the Houthis call Quds 1.”

The Quds-1 is ostensibly domestically manufactured by the Houthi rebels. In July 2019, the Houthis showed off a Quds-1 in an image alongside ostensibly home-developed Sammad drones. It’s believed a Quds-1 was used in a strike that hit Saudi Arabia’s Abha International Airport in southwestern Saudi Arabia on June 12, injuring twenty-six. You can see terrifying security camera footage of the attack here, and video of its aftermath here.

In this incident, the Saudis also claimed the missile was a Ya’Ali instead of a Quds.

Does that exculpate the Iran? Not at all—because there’s good reason to believe the Quds-1 itself is of Iranian origin.

Indeed, the Quds resembles a smaller version of Iran’s ground-launched Soumar cruise missile, a strategic weapon with an estimated range of around 1,200 to 1,800 miles. The seven-meter long Soumar is believed to be derived from the Russian turbofan-powered air-launched Kh-55 cruise missile, which Ukraine sold twelve of to Iran in 2005.

The significantly smaller, turbojet-powered Quds-1 has a shorter range than the Soumar. But according to Hinz, a wind-tunnel model of a missile that more closely resembles the Quds-1 than the Soumar itself was shown on an Iranian state television exhibition showcasing domestically developed weapons.

“While the Soumar has a mid-wing design with foldable wings, the Quds has fixed wings situated lower on the fuselage (the Houthis apparently presented it upside down). This feature, which is quite rare in the world of cruise missiles, is also visible on the wind tunnel model.

“The nose sections of both systems also differ in shape. The Soumar’s nose is perfectly rounded; the Quds’ nose looks a little pointier…it does look like the nose of the wind tunnel model is indeed closer to the Quds than the Soumar.”

You can check out Hinz’s article to see side-by-side visual comparisons.

Furthermore, the Quds-1 is experts estimate the Quds-1 has a range comparable to that of the Ya’ali at around 434 miles. As the oil facilities lie nearly 800 miles away from Houthi territory, and over 500 miles from any point in Yemen, that doesn’t really add up to the attacking originating from Yemeni territory.

It’s far more feasible for a Quds missile to have been launched from Iran, which lies only 200 to 300 miles away.

It’s probably not necessary to get one’s hands too greasy with rocket science to determine the Iranian origin of the drone attack.

More than a year after Washington withdrew from the JCPOA nuclear deal and renewed economically crippling sanctions targeting Iran, Tehran has decided to retaliate by showing it can disrupt lucrative oil industries of its Arab neighbors across the narrow waters of the Persian Gulf.

Iran’s campaign has involved clandestine sabotage of commercial shipping, as well as an overt attack on a U.S. drone over international airspace and the seizure of several ships for “smuggling.” Fortunately, none of these incidents have resulted in loss of life so far.

It’s also worth remembering that such operations conform to an established historical pattern. During the Iran-Iraq war of the 1980s, Iran also resorted to harassment of Persian Gulf shipping to retaliate against the Arab states financing Iraq’s war effort.

Today, Iran’s attacks are calculated to clearly convey Iran’s hand to elite political and military leaders, while remaining outwardly deniable to the global public. Tehran’s goal to persuade Western powers to reopen vital economic arteries that have been impeded by Washington’s renewed sanctions, lest Tehran’s further disrupt the oil trade in the Gulf.

Recognizing Iran’s hand in the attacks need not be seen as tantamount to endorsing another war in the Middle East, which arguably would be disastrous for nearly all the parties involved.

Instead it can lead to a more honest discussion as to why Iran is engaging in these destructive tactics, and which kinds of carrots and sticks can disincentivize them.