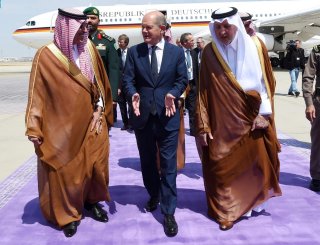 During his two-day trip to the Persian Gulf last weekend, German chancellor Olaf Scholz signed a gas deal with the United Arab Emirates (UAE) as part of his effort to obtain alternative gas sources for his country after Russia stopped delivering gas through the Nord Stream 1 pipeline earlier this month.

In a September 25 statement, German energy company RWE announced that the UAE will deliver 137,000 cubic meters of liquefied natural gas (LNG) to Germany by the end of the calendar year. The two nations also agreed to a non-binding memorandum of understanding that would send an unspecified quantity of LNG to Germany sometime in 2023.

This total only accounts for a tiny fraction of the more than 50 billion cubic meters of gas Germany received from Russia in 2020. Early indications suggest that, at least in the short term, it may prove difficult for Germany to replace Russia’s gas supply.

Scholz’s trip to the UAE came between visits to Saudi Arabia and Qatar, two other oil exporting nations. Earlier reports indicated that Germany would also look to secure gas from Qatar, but the chancellor’s stop there concluded without the official announcement of a deal between the two nations. Discussions over a long-term agreement are reportedly ongoing.

Recent events have forced the largest economy in Europe to scramble for new gas suppliers. At the start of September, Russian state-owned gas company Gazprom announced that the Nord Stream pipeline would be indefinitely shut down due to “malfunctions.” Then, unexplained leaks in the pipelines on September 27 made a resumption in oil delivery in the near future even more unlikely. Gas prices in Europe have already risen significantly as a result of the leaks, which European authorities have said that they are investigating.

Even before this string of events, Germany was becoming less reliant on Russian oil. On September 2, CBS News reported, “Before Russia invaded Ukraine on February 24, Germany relied on Russia for 55% of its gas supplies. In August, however, that proportion fell to 9.5%, according to a spokeswoman for the Federal Ministry of Economics.” The Kremlin has blamed Western sanctions for the ongoing pumping problems, and a spokesman said that operation would “definitely” resume if sanctions were eased.

But Western nations—particularly those in the G7—are more likely to impose a price cap on Russian oil than to ease sanctions on Moscow. And Russian president Vladimir Putin has already threatened to cut off supply to participating countries if and when the price caps are implemented. Scholz’s trip to the Middle East suggests how European governments may proceed in such a scenario, but also raises further questions.

In anticipation of the chancellor’s trip, the chairwoman of the German Bundestag’s human rights committee, Renata Alt, remarked, “As important as it is to secure energy supplies to Germany, it is equally important to respect human rights worldwide. You cannot negotiate about one without addressing the other.” In Saudi Arabia, Scholz met with Saudi crown prince Mohammad bin Salman to kick off his visit to the region. The chancellor insisted that he discussed human and civil rights with his Saudi counterpart, though he did not offer many details. As the West looks to punish Russia for its illegal invasion of Ukraine, it has simultaneously decided to turn toward autocratic regimes in the Middle East to replenish its gas supply. Thus, reliance on Gulf states is likely to increase.

Many questions surrounding the future of oil and gas supply remain. It is unclear if the proposed price cap on Russian exports will be effective, whether Russia will continue to follow through on its threat to freeze energy supplies in response, and how the Organization of the Petroleum Exporting Countries (OPEC), led by Saudi Arabia, will react. But Scholz’s trip this weekend signals how Europe has changed.