SECNAV Del Toro: Columbia-Class Submarines Are 'On Track' for 2031 Deployment 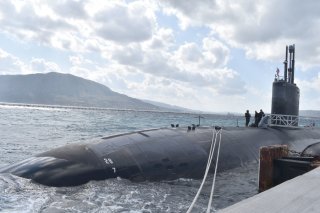 The U.S. Navy’s new Constellation-class frigate is a gamechanger, offering deck-mounted guns; launching drone operations; and armed with cruise missile defenses, anti-submarine technology, and an integrated network of “meshed” sensors. These new warships will be tasked with many missions, including a requirement to find and destroy small swarming boat attacks, support carrier strike groups, conduct disaggregated operations, attack enemies over the horizon with missiles, and engage in advanced surface and anti-submarine warfare.

The new, well-armed ships are a large priority for the Navy, which has set an ambitious pace of building as many as fifteen frigates within the next five years. At the moment, the current build rate is slated at one or two new frigates per year, yet members of Congress are asking for the Navy to accelerate its program and build three or four new frigates per year, which would require the addition of a second shipyard. U.S. senator Tammy Baldwin (D-WI) whose district is home to the frigate’s construction, raised concerns that a single shipyard may simply be insufficient to meet the demand. She questioned Navy leaders about their resolve related to the possibility of expanding shipbuilding capacity to increase the pace of production and sustain a robust industrial base. During a Senate Appropriations Subcommittee on Defense 2023 Budget hearing, Navy Secretary Carlos Del Toro said he was “in favor” of adding a second shipyard, referring to the importance of maintaining a highly-skilled and available shipbuilding industrial base with the requisite expertise.

“Proper investments in the Frigate industrial base will be important,” Del Toro told lawmakers. Chief of Naval Operations Adm. Michael Gilday echoed the secretary’s remarks, saying “if you don’t give industry what they need, the supply chain becomes fragile.”

Significantly, the Navy’s emerging weapons structure for its new Fincantieri-built frigate appears to align with the service’s initial vision for the ship.

A Navy statement several years ago said the platform will “employ unmanned systems to penetrate and dwell in contested environments, operating at greater risk to gain sensor and weapons advantages over the adversary.”

The Constellation will come in at 496 feet long and will displace 7,300 tons. The frigate’s size and weight specifications are, by design, intended to fit between littoral combat ships and DDG 51 destroyers. While the frigates are not being built with the kinds of armaments used on destroyers, they will still be armed with heavy weapons, the Aegis radar, and missile-launching vertical launch systems.

The Navy vision for the ship, first articulated several years ago, seems to emphasize warfare networking priorities through the use of terms like “blue force sensor and weapon influence.” Navy plans have long called for the establishment of a local sensor network using passive onboard sensors and “embarked aircraft” to act as a “gateway to the fleet tactical grid,” as Navy documents describe it. This Navy vision was expressed by the service’s call for a netted system of sensors called Cooperative Engagement Capability, intended to connect radar systems to other sensor-derived information.

A concept of networking is integral to the idea of linking the new frigate with other large surface platforms such as cruisers, destroyers, and even carriers to accomplish what the Navy’s initial Request For Information identified as a need for area air defense and an ability to defend against raids of small boats.

A well-armed ship is consistent with the Navy’s articulated plans for a platform that could travel in substantial, aggregated combat scenarios such as carrier and expeditionary strike groups. At the same time, in a manner likely aligned with the Navy’s Distributed Maritime Operations strategy, the concept for the ship also likely incorporates a requirement to operate somewhat autonomously or separated from other ships in close proximity, while leveraging drones to enable more disaggregated, independent missions.