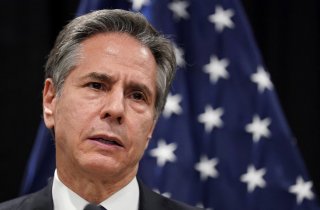 Secretary of State Antony Blinken warned on Wednesday that the United States would have a “swift and firm response” to the Kremlin if it moved to recognize the independence of the Donetsk People’s Republic (DPR) and the Luhansk People’s Republic (LPR). The DPR and LPR are pro-Russian self-declared states in Ukraine’s eastern Donbas region engaged in a conflict against the Ukrainian central government in Kyiv.

The secretary’s warning came after the State Duma, Russia’s lower house of parliament, appealed directly to Russian President Vladimir Putin to extend recognition to the two self-declared states. Putin has indicated that he would not “immediately” recognize either, but some observers have noted that recognition or non-recognition could be used as a bargaining chip in ongoing negotiations between Russia and the West over the status of Ukraine.

Blinken said on Wednesday, however, that Russian recognition of the DPR or LPR would violate the Minsk II Protocol, a multilateral agreement on the process of ending the war in Ukraine signed in the capital of Belarus in 2015.

“Enactment of this resolution would further undermine Ukraine’s sovereignty and territorial integrity, constitute a gross violation of international law, call into further question Russia’s stated commitment to continue to engage in diplomacy to achieve a peaceful resolution of this crisis,” Blinken said.

In recent months, Russia has concentrated its troops along the border with Ukraine, raising fears that it intends to invade its western neighbor. Precise estimates on the number of troops vary, but President Joe Biden claimed in a speech on Tuesday that 150,000 Russian soldiers were positioned near the border, in addition to the troops engaged in an ongoing set of military exercises in neighboring Belarus, on Ukraine’s northern flank. Moscow’s recognition of Donetsk and Luhansk as independent nations – albeit independent nations heavily reliant on Russia for political and economic support – could clear the path for them to justify a deployment of Russian troops into the Donbas region, potentially igniting a broader conflict.

Russian leaders have said that they do not intend to invade Ukraine and claimed they would remove the troops if the West firmly committed to refusing Kyiv’s admission into NATO – a demand that the United States and other NATO nations have refused. Diplomatic talks between both sides are ongoing and have been vocally supported by both Putin and Biden.