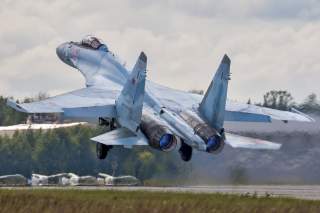 Rosoboronexport has sold 5.7 billion dollars worth of weapons since the beginning of 2019, setting the Russian defense industry up for its strongest-grossing year decades.

Though 2019 is shaping up to be a particularly profitable earnings period on the heels of Moscow’s multi-billion dollar S-400 deal with Ankara, this cannot be dismissed as a one-off occurrence. Currently sitting at a whopping 55 billion dollars, Rosoboronexport’s portfolio has steadily grown over the past decade.

Agency chief Alexander Mikheyev assured Russian state news that Rosoboronexport is not resting on its laurels: "As a world arms export leader, we are not only watching and following global trends today but are also developing unique areas of work for the market, including financial mechanisms for foreign trade activity."

But can Russia's arms trade sustain its impressive pace of growth over the coming decades?

Since the 2014 Crimean annexation, Rosoboronexport executives have wasted no time in arguing that the the Russian defense industry would be in even better financial shape were it not for the effects of the western sanctions regime: "For five years, Russia and Rosoboronexport have been confronted with serious restrictions from some international financial institutions that have become strongly dependent on the political will of some world arms market players. We can only perceive them as unfair competition and the attempts of pressure on us and our partners," said Mikheyev.

Mikheyev’s claim is inarguably true as far as the secondary effects of sanctions are concerned; the Kremlin is currently being denied western capital inflows that, among other things, could otherwise have contributed to the growth of the Russian defense sector. However, sanctions have had no discernable effect on Moscow’s ability to secure a series of lucrative arms deals over the past several years. The reason is hardly surprising: the nations most likely to abide by the sanctions regime are western NATO members who are already militarily and politically invested in NATO’s defense infrastructure, and thus were never prospective Russian clients to begin with. Meanwhile, sanctions have done little to stop some of the world’s biggest arms importers from doing business with Russia.

It was only last year that India signed a gargantuan 5.43 billion dollar weapons deal with Russia. There was talk of punishing India under the Countering America's Adversaries Through Sanctions Act (CAATSA), but Washington is dragging its heels over concerns of alienating New Delhi. Washington successfully sanctioned China under CAATSA, but this had no discernible effect on the burgeoning Sino-Russian defense relationship. Most recently, Moscow exploited the growing political rift between NATO-aligned Turkey and the west to not only sell the S-400 to Ankara, but to secure a joint Russian-Turkish manufacturing deal for its upcoming S-500 anti air system.

In keeping with their ongoing export strategy of targeting prospective clients who are beyond the reach of western sanctions, Rosoboronexport plans to make further inroads in Africa, Latin America, the Middle-East, and Central Asia. Furthermore, the Russian arms trade is aggressively competing for second and third world import markets with a glut of cheaper, Soviet-inherited hardware that may lack the technical bells and whistles of their latest offerings, but nonetheless offers cost-effective performance for low and medium intensity warfare.

Rosoboronexport’s ongoing success presents the Washington security establishment with a stark political reality that shows no signs of changing over the coming years: Russia’s remarkably resilient arms export business has not only survived, but is thriving, under the post-Crimea sanctions regime.