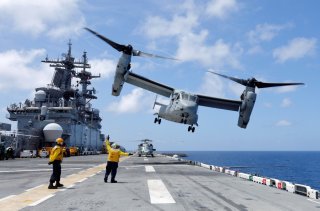 U.S. Marine Corps pilots with Marine Medium Tiltrotor Squadron 363, normally stationed at Marine Corps Air Base Hawaii, recently completed one of the longest flights ever undertaken in the history of the 1st Marine Aircraft Wing.

The Osprey flight, which totaled more than 4,730 nautical miles, was part of Balikatan 2022, an annual joint military exercise conducted with the Philippines.

The Osprey’s long jaunt “has significant strategic value in demonstrating VMM-363’s ability to self-deploy across the INDOPACOM AOR and reaffirms the capability and operational reach that the MV-22 Osprey brings to the nation’s naval expeditionary force-in-readiness,” Lt. Col. Joe Whitefield, commanding officer of VMM-363, explained in a Marine Corps statement.

The Pacific Ocean is the world’s largest body of water, and in-theater operations must overcome the intense logistical challenges, especially when it comes to fuel. During the flight, the V-22 Ospreys refueled.

The Marine Corps statement explained that “long-range movements of this nature validate the operational mobility of the squadron in support of joint, naval, and Marine Corps operating concepts as outlined in Force Design 2030."

The Marine Corps is shifting gears from the long, grinding land wars that defined the United States’ Middle Eastern campaigns in Iraq and Afghanistan to a nimbler, lighter force structure that prioritizes highly decentralized amphibious operations, or expeditionary advanced base operations (EABO).

The Marines explained that EABOs are a “form of warfare that involves the use of mobile, relevant, ready, and sustainable naval forces from temporary locations either on or near land, quickly in order to conduct sea denial, support sea control, or enable fleet sustainment.”

The statement added that the “forward posture and advanced level of readiness gained through long-range training means that 1st MAW can establish expeditionary advanced bases at the time and place of its choosing in support of a larger naval campaign.”

The Marines’ reorientation toward an increasingly hostile China and the Indo-Pacific region will largely depend on how well the Corps can overcome the physical and practical elements of a vast maritime environment. And while this most recent V-22 Osprey flight is not the first of its kind for the Marine Corps, it represents the challenges of the region: completing a large number of flights and ensuring the Corps has sufficient fuel and firepower.