Should the Abrams Be Deployable or Survivable? 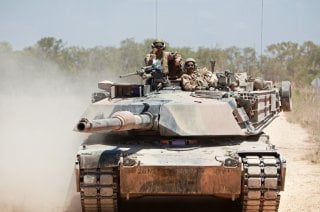 U.S. Army deliberations about reconciling a unique paradox for armored vehicles have continued for several decades. The problem involves vehicle weight, technological capability, and survivability. Futurists and weapons developers are exploring how to engineer a lightweight, deployable, and highly lethal armored vehicle with the levels of survivability needed to withstand heavy incoming enemy fire and prevail in major armored warfare.

The question is whether that can actually be done given there is no substitute for the protection and firepower of heavily armed manned platforms like the Abrams battle tank. At the same time, keeping the Abrams does not preclude or diminish the possibilities for engineering faster, lighter, and potentially unmanned vehicles to operate alongside a heavy tank. The U.S. Army seems to be pursuing both, and why not?

“We are gathering information in the form of studies, maturing technologies and doing deep dives into what will be required from a decisive platform in the future. We are in the exploratory phases and do not want to take anything off the table when it comes to the best thing for our soldiers in the future. We are exploring characteristics and not requirements and looking at broad solutions to known problems,” Coffman told The National Interest.

However, will there be a replacement for the U.S. Army’s upgraded Abrams main battle tank? Or, will there still be a need for a heavy armor vehicle to withstand mechanized attacks? Perhaps a new Abrams-like platform, should it come to fruition, will be a large, heavy vehicle with Abrams-like armor protection. At the moment, there may not be anything with a comparable protective performance that can replace it.

Could a lightweight armor composite vehicle with a new, impenetrable active protection system be an alternative? Perhaps the optimal solution lies in the fast-emerging phenomenon of manned-unmanned teaming.

The most significant factor in this entire equation relates to a collection of unprecedented innovations soon to be revealed by General Dynamics Land Systems on the unmanned “Abrams X” future tank.