Should Social Security Be Getting Less Funding Than Ukraine? 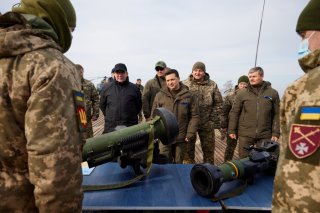 Congress recently appropriated $13.6 billion in aid to assist Ukraine in its fight against Russia. And at the same time, Congress kicked in $13.3 billion for the Social Security Administration (SSA). However, Congress appropriated more money for Ukraine than President Biden asked for, and it will be granting less for Social Security than Biden requested.

A new op-ed asks why this happened. Writing in the Hill, David A. Weaver, an economist who has authored studies about the Social Security program, noted that Social Security is significantly underfunded. “It's possible to laud assistance to Ukraine and still wonder what's wrong at home,” he wrote. “The effects of underfunding an agency with a growing workload are not particularly surprising: large backlogs (one million Americans are currently waiting for a disability determination from SSA), a collapsing service infrastructure (SSA's phone systems are physically breaking down under the volume of calls), and furious members of the public who, in the most difficult times of their lives, cannot get help.”

Indeed, a report in February by the Center on Budget and Policy Priorities argued that the Social Security Administration has been underfunded for over a decade. It added that while the president had asked for a 10 percent increase in SSA funding, both houses of Congress passed bills with smaller increases.  “The agency’s operating budget fell 13 percent in inflation-adjusted terms from 2010 to 2021, even as the number of Social Security beneficiaries grew by 21 percent. Austere caps on discretionary funding contributed to the problem, but even when there was bipartisan agreement to raise the caps in 2020 and 2021, SSA’s operating budget didn’t keep up with inflation,” Kathleen Romig wrote in the introduction of the report.

“Looking for another opportunity to help serve the American people? If so, we are seeking retirees to help the agency as we begin to transition to reentry and re-open our field offices to the public. We are seeking temporary support for approximately 400 field offices during reentry,” the solicitation says. Retirees who take SSA up on the offer will be able to obtain a dual compensation waiver, meaning that “you will continue to draw your full monthly annuity and a full Salary—no reduction.”