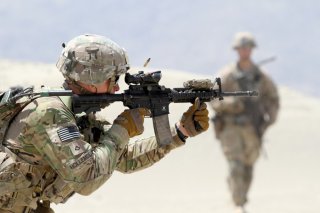 The U.S. Army has decided to award Sig Sauer a contract to build the new Next Generation Squad Weapon, a decision that Col. Scott Madore, the project manager for Soldier Lethality, explained is the “culmination of over two years of intensive soldier and technical testing.”

In a press release covering the weapon, Colonel Madore explained that the contract award is a ten-year, indefinite-delivery contract of unlimited quantity, adding that the first delivery order is worth $20.4 million.

Later in the briefing, BG Larry Burris explained that the program to select the Next Generation Squad Weapon was aimed at the “rapid fielding of increased capabilities to enhance the ability of the Soldier and squad to fight, win and survive on the modern battlefield.”

He added that in order to fight and win, American soldiers will need to achieve a “clear and sustainable overmatch against our near-peer adversaries.” Brigadier General Burris added that considering peer adversaries was a novel concept for the Army.

The Army’s new weapon is actually a pair of weapons—a rifle and an automatic rifle. And in addition to the latest weaponry, the U.S. Army has also decided to field a new fire control system, as well as a new caliber cartridge in 6.8mm to boot.

The new cartridge “builds upon the enhanced performance round, the EPR, in our current 5.56 inventory and enhancements in other calibers to address a broad spectrum of targets.”

The current “5.56 cartridge has been maxed out from the performance perspective. The new weapon, with its increased operating pressure and size allows the Army to significantly increase the performance capability of the ammunition,” the general explained.

“These advances allow Soldiers at the squad level to deliver improved target defeat at higher energies to advanced threats at extended ranges.”

Interestingly, the general explained that the 6.8mm ammunition would not replace the NATO-standard 5.56mm or 7.62mm, which nearly all U.S. allies, as well as many partner countries, use.

The competitors also offered new, lower-weight ammunition to go along with their weapon offering during the testing. In Sig Sauer’s case, the company provided a bi-metallic case made of brass but with a steel base that the company says weighs less than traditional cases.

Oddly enough, the ammunition weight requirement as part of the competition specified that the 6.8mm ammo should weigh less than 7.62mm NATO ammunition. As the 6.8mm ammunition is smaller in diameter than the larger 7.62mm, it is, by definition, lighter.