Sink or Swim: How Companies Are Surviving Supply Chain Disruptions 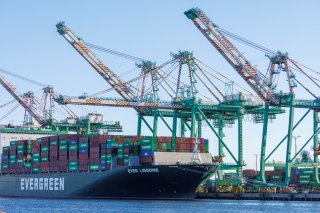 If you asked people two and a half years ago what their thoughts were regarding “supply chains,” most would have stated that they were not sure what supply chains were, did not fully understand them, had no opinion, or did not care.

The global pandemic changed all of that. Today, the public knows supply chains matter.

In retrospect, Covid-19 was a “black swan” event. Who could have foreseen a virus, emanating in China from either the Wuhan Institute of Virology or a wet market? Such a catastrophic event, given both the size and velocity of the virus’ spread globally, took everyone by surprise.

Given the magnitude of the pandemic, it is fair to say that supply chains came down with Covid-19, with 94 percent of Fortune 100 companies reporting major disruptions. To illustrate, in manufacturing, a power outage, a broken lathe, or a flat tire on an eighteen-wheeler delivering tractor parts can be remedied relatively quickly. However, one broken, missing, or dysfunctional link that is critical to the entire supply chain can negatively impact the entire chain. This kind of “system entropy” is akin to a fifty-car chain reaction pileup on the I-90 due to a blizzard.

Since producers cut back on production when demand fell after the pandemic first struck, we are experiencing a recovery during which supply cannot match surging demand. Compounding the scarcity and delay of goods produced is the dramatic increase in the price of goods, including the inputs for production.

The supply chain crisis has been felt most deeply across the auto, electronics, and appliance industries where semiconductors are essential. Lockdowns and the trade war with China have exacerbated the shortages of inputs and final products. Add to that the shortage of workers—especially truckers—west coast port congestion, and a lack of warehousing space, and one can see why this is a “perfect storm.”

So, how have companies and their supply chains responded to mitigate some of the greatest challenges posed by the global pandemic?

Gary Goldfarb, chief strategy officer at Interport Logistics, told me that before the pandemic ocean freight rates from Asia to the United States ranged from $900 per forty-foot container to the west coast to $ 2,500.00 to the eastern seaboard. These rates skyrocketed more than ten times during the pandemic months and have only come down slightly since then.

Perhaps the most profound impact of the global pandemic on business is how international companies structure, plan, and operate their enterprises. Among the most dramatic changes is the higher premium placed on agility, resilience, and risk mitigation. It used to be just-in-time production and inventory management were the coin of the realm; now it’s “just in case.” Accordingly, many companies that have outsourced production to China have revamped their sourcing strategies to produce either in-house or nearshore. For time-sensitive goods that need a quick turnaround, nearshoring is now the way to go. Mexico and Central America have benefited greatly as global companies such as Nike, Puma, Adidas, Ralph Lauren, Tommy Hilfiger, and Under Armour have turned to suppliers in the western hemisphere.

Other important factors such as rising wages in China, increased freight costs, and improved quality and reliability of components and finished products made in Mexico and Central America have enhanced the attractiveness and feasibility of nearshoring.

And it’s not just consumer goods. A recent Ernst & Young survey of industrial supply chains found that more than half of the respondent companies have nearshored or reshored some of their operations over the last twenty-four months and 44 percent are planning new or additional nearshoring. U.S. companies are not alone, however, as 65 percent of Chinese companies have nearshored or reshored operations over the last two years.

Goldfarb also predicted that there will be a different configuration of goods in the U.S. market. For example, Mexican railroad companies have plans to use combined transportation schemes to get products from manufacturing to consumers using a combination of trucks, ocean transport, and rail deliveries. Goldfarb noted that while “the era of JIT (just in time) seems to be over, the era of BDT (best delivery time) is just beginning.”

Supply chain challenges will be with us for the foreseeable future. In light of that outlook, we can confidently assert that agility, resilience, and the mobilization of sourcing options are, metaphorically, the personal protective equipment for supply chains in the Age of Covid.

Jerry Haar is a professor of international business at Florida International University, a global fellow of the Woodrow Wilson International Center for Scholars in Washington, D.C., and a senior fellow of the Council on Competitiveness. He also serves on the board of The World Trade Center Miami.