Some F-35s Can’t Fly Fast Without Wrecking Themselves 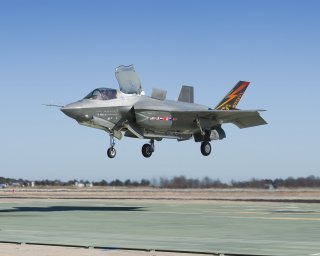 The F-35 stealth fighter continues to suffer serious “category one” design flaws, according to a trio of reports from trade publication Defense News on April 24, 2020. Some of those flaws might be permanent, the publication reported.

In the summer of 2019 Defense News revealed 13 serious problems with the single-engine stealth fighter, which is in front-line service with the U.S. Air Force, Navy and Marine Corps as well as allied air arms and which has flown combat missions over the Middle East.

- On the F-35B and F-35C variants, structural damage during supersonic flight

- A disorienting green glow on the pilot’s helmet display

- Flaws in the night-vision camera

- Fragility in the hydraulics system

- Unexplained spikes in cockpit air pressure on some F-35As

- Problems with the logistics system’s tracking of spare parts

The U.S. Defense Department told Defense News it promptly fixed five of the flaws -- including the green glow -- and partially solved another five pending more permanent solutions. Three remain totally unresolved, in particular the hydraulic flaw and the damage from supersonic flight.

The government told Defense News some of the fixes could take years to complete owing to resource constraints at the testing level. The cockpit-pressure and night-vision problems are scheduled for 2021 fixes. The sea-scan flaw could take until 2024 to solve.

But the structural damage that the Navy’s F-35C and the Marine Corps’s F-35B suffer when flying at supersonic speed reportedly is unfixable -- and potentially the most serious long-term problem for the stealth fighter.

After long periods at speeds faster than Mach one, the F-35B and F-35C suffer damage to their tails. The damage can destroy some of the aircraft’s antennae and also wreck the radar-absorbing coating that helps to keep down the F-35’s signature on enemy sensors.

It might take a major redesign to fix the flaw, so the government just … gave up.

“This issue was closed on Dec. 17, 2019 with no further actions and concurrence from the U.S. services,” the F-35 program office told Defense News. “The [deficiency report] was closed under the category of ‘no plan to correct,’ which is used by the F-35 team when the operator value provided by a complete fix does not justify the estimated cost of that fix.”

“In this case, the solution would require a lengthy development and flight testing of a material coating that can tolerate the flight environment for unlimited time while satisfying the weight and other requirements of a control surface,” the program office continued. “Instead, the issue is being addressed procedurally by imposing a time limit on high-speed flight.”

In other words, the Navy and Marine Corps are telling pilots not to fly for very long at supersonic speeds. The problem is that supersonic dash can be decisive in the most extreme aerial combat. And enemy fighters such as Sukhoi’s Su-35 and China’s J-20 apparently do not have the same supersonic limitations that the F-35B and F-35C now have.